It’s been said there are two kinds of whitetail hunters: Those who’ve lost a buck and those who will. Hunt... 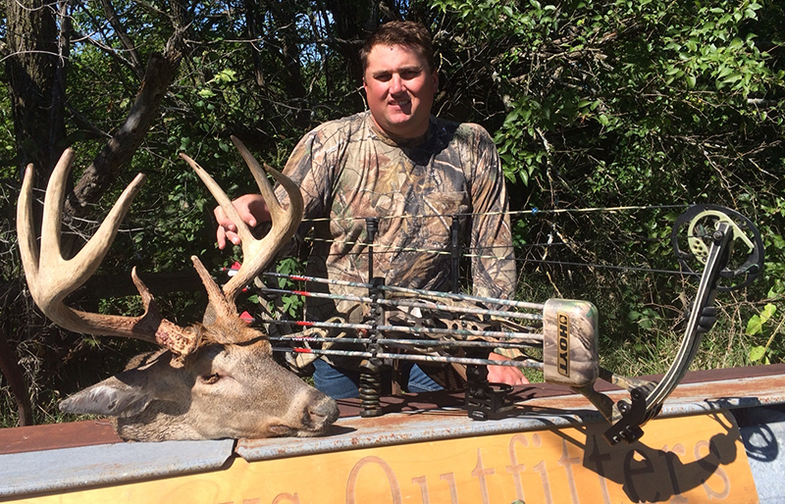 It’s been said there are two kinds of whitetail hunters: Those who’ve lost a buck and those who will. Hunt long enough, and odds are pretty good that eventually a deer you’ve wounded will give you the slip. It’s a rotten feeling to follow a blood trail that peters out to nothing, leaving you to replay the shot over and over in your mind and wonder what went wrong.

But sometimes the deer gods cut us a break, and we manage to salvage some measure of consolation by locating a buck we feared was lost. Such was the case for Andy Jeffries of Twin Chimneys Outfitters in southeast Kansas, who shot the heavy 8-pointer above on opening day of the Kansas archery season, and then backed out to avoid pushing the wounded deer. “Unfortunately, Jeffries says, “it got bumped over 1.5 miles down the creek,” possibly by other hunters’ movements. Jeffries searched for a week before finally recovering the highly symmetrical rack. He got the shot by taking advantage of the summer patterns that were hanging on in mid-September, but since that first week of the season, he reports, the deer in his area “have transitioned into night mode.” With crops coming out and temperatures dropping, he’s expecting to see more activity soon, though an abundance of acorns guarantees that most of the action will take place on the hardwood ridges rather than in Twin Chimneys’ food plots.

Jeffries weeklong delay in claiming his buck is nothing compared to the two-year wait experienced by Dusty Smart, of Emporia, Kansas. Smart recently recovered a massive nontypical he shot the day before the opening of gun season in 2012. The cold trail was given new life when a friend scouting a farm near where Smart hunts saw a huge skull and antlers hanging in the landowner’s shed, discovered this summer by the landowner’s young son. The 28-point rack shown here is now in Smart’s possession, and he estimates it will score around 235—good enough to make it a top-20 nontypical archery buck in the state of Kansas.

“It’s a buck of a lifetime,” Smart says. “You see him and get all excited, and then you shoot him and lose him and you’re down in the dumps. Then you get him back. It’s crazy times.”