As More Bow Seasons Open, So Do Scrapes

Overall activity status: Guide and hunter input to this blog should expand greatly in the days ahead, thanks to the... 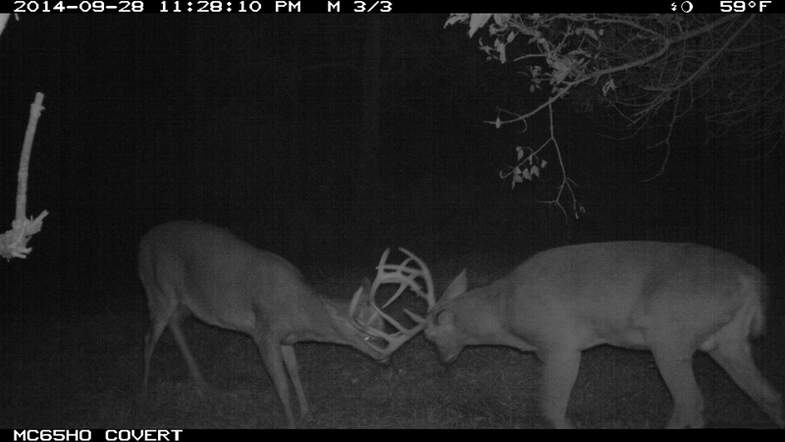 Overall activity status: Guide and hunter input to this blog should expand greatly in the days ahead, thanks to the opening of bowhunting seasons this weekend in Iowa, Illinois and Indiana. These “breadbasket” locales are well known for producing trophy bucks, and I’ll look forward to the buck activity reports from my contacts there. Meanwhile, I’ve noticed a significant uptick in scraping and rubbing activity in my own scouting here in Minnesota. More on that below.

Fighting: My trail cameras have captured no less than three buck fights in the past few weeks; something of a record for me this time of year. While two of these fights seemed short-lived and not serious, I had a pair of good bucks (pictured above) go at it for a full nine minutes this week. While it was no knock-down drag-out, I had enough images of the fight to see that it was clear these bucks were feeling ornery. Each time one would try to work a nearby mock scrape (it’s located just off the hindquarter of the buck on the right), the other deer would get irritated and start the brawl again. Fascinating stuff to watch!

Rub making: I’ve also seen a rise in rub-making, particularly near field and food plot edges. Some of the rubs are on larger trees and shrubs, particularly sumac, which adores edge habitat and has a soft, aromatic bark that bucks love thrashing. Pay attention to the tree/shrub species that bucks enjoy rubbing in your area and you’ll increase your ability to find rubs while scouting.

Scrape making: Definitely on the rise, particularly on field edges. This is an excellent time to start making mock scrapes (if you haven’t already), as the next three weeks will see the most active scrape usage of the entire fall. If you don’t have cameras positioned on mock or real scrapes right now, get them there in a hurry, or you’ll miss an excellent chance to census the bucks in your hunting area.

Chasing: None to report.

Daytime movement: Weather has made this a hit-and-miss affair. Rain has swept into much of the region (a good thing for deer movement) but on some days it’s accompanied by high humidity (which suppresses movement). There’s supposed to be a major cool front hitting the upper Midwest this weekend; if that occurs, expect daytime movement to increase.

Estrous signs: None to report. However, a handful of does will enter estrus a month earlier than the normal peak (which in this region is the second week of November), so this could change in the days ahead.

X-Factor: I’m calling a clear tie between crop harvest (covered in an earlier post this week) and temperature. Both categories can have a tremendous impact on how well (and where) deer move. If combines stay active and the temp drops, I expect some very nice bucks to be shot in the days ahead. If rains keep farmers out of the fields and the temp stays muggy… well, there’s plenty of scouting to do and football to watch.