The calendar says fall is officially here, but the folks at Lil’ Toledo Lodge in southeastern Kansas know it’s not... 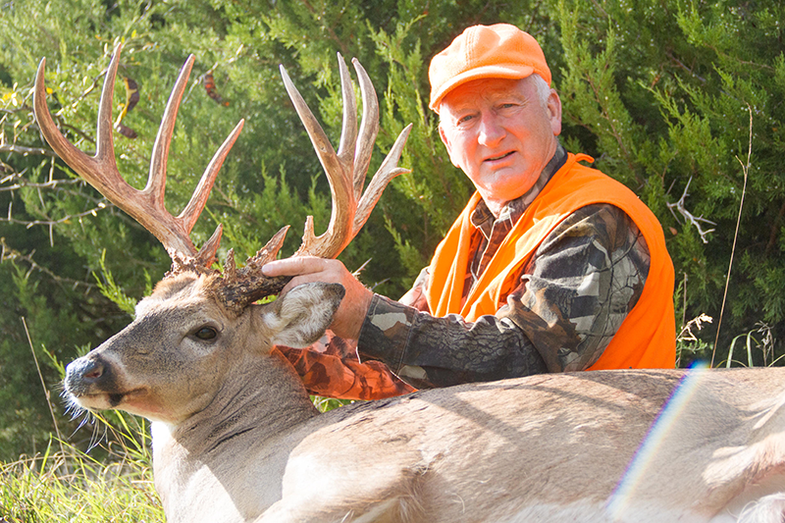 The calendar says fall is officially here, but the folks at Lil’ Toledo Lodge in southeastern Kansas know it’s not too late to find bucks that are still sticking to the summer drill of hanging together and following a fairly steady bed-to-feed pattern. Kim Sherman and Trace Goodwin, guides at the Chanute-area outfitter, helped put a client on the 170-class whitetail in this photo last Thursday. They first identified the buck in early August as part of a bachelor group. When bucks went to hard horn in September, the Booner disappeared for a week before rejoining the group in its original core area, where he quickly established his place at the top of the pecking order. Trail cameras let the guides determine the buck was following a regular routine that most evenings put him on a food plot of clover, wheat, and turnips at twilight. “We couldn’t hunt the site early on because the wind direction was wrong,” Goodwin says, “so we had to wait for the day when conditions were just right.” Thursday was that day, and Ray—a longtime client who has hunted with Lil’ Toledo for eight years—made an 80-yard muzzleloader shot from a tower blind to bring down his best whitetail ever.

So bucks are definitely still tolerating one another’s company. The ongoing move to acorns, however, could make the bed-to-feed pattern of these bachelor groups a little harder to predict. “Our mast situation is over the top this year,” Sherman says, “and both bucks and does are definitely transitioning to the woods to pack on weight in preparation for the rut.” Cool temperatures Monday brought a welcome spike in daytime movement that had been lagging with the return to more seasonal hot weather, he reports, and the new moon later this week could help stir up some movement too. That makes now a good time to get out if you can, since the deer will be getting progressively more nocturnal as we head into October. Says Sherman, “I’m hoping for a great hunt this week.”