Bucks Are Responding to a Change in Temperature

Timing is everything when it comes to hunting big bucks, and this pair of 140-class typicals taken within 10 minutes... 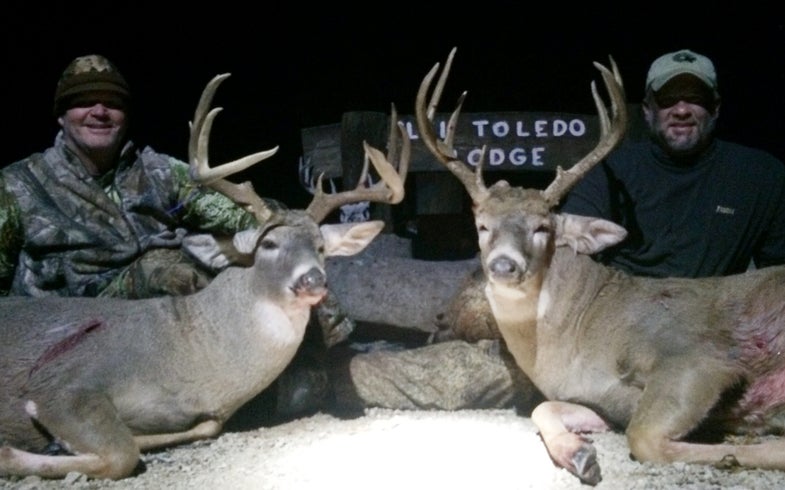 Timing is everything when it comes to hunting big bucks, and this pair of 140-class typicals taken within 10 minutes and 10 miles of each other last weekend proves the point nicely.

Scott Zornes (left) and Brett Braden shot the deer on an evening hunt with the outfitters at Lil’ Toledo Lodge in Kansas. Zornes’ 10-pointer scored 148; Braden’s taped out at 140 and tipped the scales at a whopping 260 pounds. Both bucks were shot near sunset on Nov. 1 as temperatures dropped on the heels of a cold front.

“Young bucks have been fired up for a week, but a lot of the bigger bucks have been strictly nocturnal or showing up in borderline shooting light,” says guide Kim Sherman. While he watched younger bucks pressuring does that weren’t quite ready, he waited patiently for the big boys to show. Saturday’s temperature drop made it happen.

“It’s sort of like a slow-burning fuse,” Sherman says of the spike in deer activity. “You get a spark and then it simmers down and just smokes until it fires up and sparks again. Saturday was one of those sparky nights.”

Sparky days, actually: Calm air after several days of 20- to 30-mile-per-hour winds, along with temperatures that dropped into the 20s, got bucks moving early, too. Sherman nearly rattled in a “megabuck” that morning, but the deer hung up 50 yards out.

Hunters reported hearing lots of vocalizing from bucks, and Braden grunted his buck in. “He came out of the tree line and walked up and stood right under my stand,” Braden says. “When he started back where he’d come from, I let him get 25 yards away and grunted again. This time he circled out into the pasture where I could get a good look at him, and I knew it was going to happen.”

Zornes watched his buck chase does for 20 minutes without getting a shot. Finally, with a doe downwind blowing at him and a smaller buck standing 20 yards away, he decided to take his chances with the big buck moving away from him in thick cover.

“I just surveyed the picture and said, ‘I don’t know what I’m gonna do, but if I don’t get up and try to shoot this buck, I may not get another shot.’ I just decided it’s now or never and I stood up.” When Zornes tried to draw, his safety tether got in the way. He found a way to make the shot, and afterward was glad he did. “It was 80 percent lucky,” Zornes says, “and 20 percent I said to hell with it and made something happen.”

Zornes and Braden, both of Houston, relished the chance to share their simultaneous success. Sherman says the Texans’ twofer isn’t so unusual. “We’ve had three or four nice bucks taken in a night. When the deer are ready, you can kill them. And they’re just now getting ready. They’re just starting to make the mistakes that make them harvestable.”