Overall activity status: Bucks are definitely mixing it up with each other and with does, but whether or not hunters... 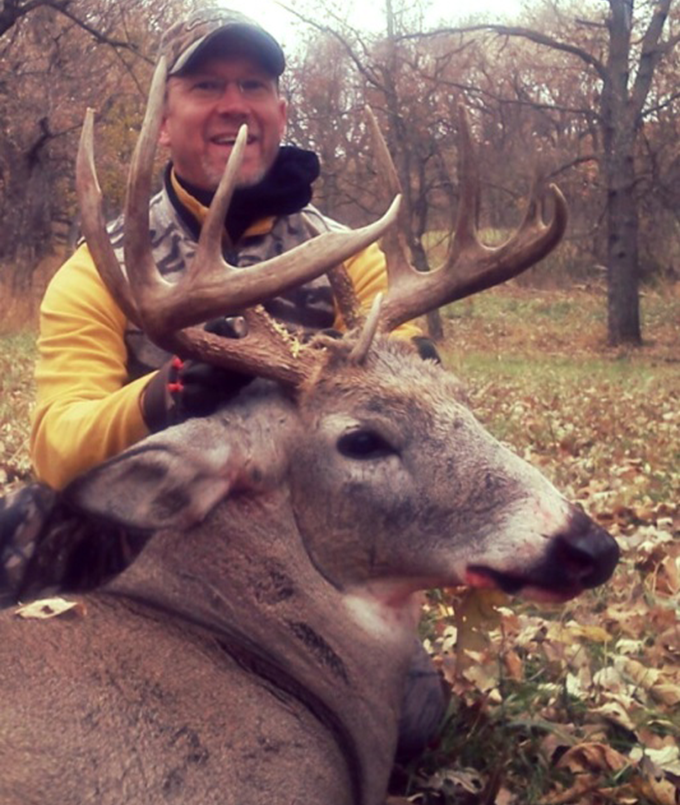 Overall activity status: Bucks are definitely mixing it up with each other and with does, but whether or not hunters are seeing activity during daytime depends largely on weather, crops, and how much hunting pressure the deer are feeling in their area.

Shannon Deboer shot the 5×5 mainframe buck shown here (check out the bonus “unicorn” kicker up front) about 40 minutes after sunrise Saturday on family land in Gregory County, South Dakota. According to Shannon’s brother, Clinton Deboer, the pair has been getting good daytime photos for weeks of this buck on one of the 20 trail cameras they run on their 1500 acres. Bucks have been showing earlier in the afternoon in the last 7 to 10 days, moving into food plots an hour before sundown to feed or check does. The early activity, though, may be attributed to low hunting pressure and relatively small amount of cropland on their property. “Our bucks tend not to go nocturnal until after gun season, around December 1,” Clinton Deboer says. “It’s a different story on the properties surrounding ours, where there’s still thousands of acres of standing corn for deer to stay in.”

Fighting: Nathan Oehlert in Kansas gathered “tons of trail camera videos” of bucks fighting in the last week. On a morning hunt he saw two mature bucks square off after one buck snort-wheezed at the other. The heavy foliage still on trees obscured his view of the fight, which lasted several minutes. South Dakota’s Clinton Deboer watched four bucks under his stand tickle antlers and saw the biggest chasing the others in a show of dominance. Deboer has tried some grunting without success. Curt Frazell is seeing some fighting on his cameras in Kansas, and Spencer Neuharth reports fighting in South Dakota, but not enough for him to break out his rattling antlers yet.

Rub making: Multiple reports of rubs all across the region, but in general there seem to be fewer rubs than scrapes at the moment.

Scrape making: Clinton Deboer says bucks in his part of South Dakota seem to be running rub lines and scrape lines more actively in the last week, and Neuharth is just now seeing scrapes pop up in that state. I noticed a big uptick in scrapes this week in Kansas, as did Curt Frazell. Oehlert in Kansas notes that one of the two bucks he saw fighting was tending a scrape before the fight began.

Chasing: Deboer and Neuharth have both seen bucks chasing does in South Dakota. Right now only small bucks are chasing and does remain uninterested.

Daytime movement: Spencer Neuharth says deer are active in South Dakota, but mostly at night. Nathan Oehlert is seeing some daytime movement in Kansas, but mornings are better than evenings. That’s no surprise since above average temperatures across the region has confined cool weather to early morning hours.

X Factor: Crops are still a big factor in the Great Plains. “Beans are completely gone and corn is in the works,” Neuharth says of South Dakota. “There’s been talk of farmers leaving corn in the fields until December to allow it to dry out, which could be devastating for archers.” In Kansas, Curt Frazell notes standing crops are hurting deer movement: “When the milo gets cut,” he says, “it should push some new bucks to my spots.” Daytime highs in the 80s across the region aren’t doing hunters any favors either, and the forecast calls for more of the same through the weekend. Let’s hope farmers at least take advantage of the temperate weather to keep those combines rolling.