Lingering hot, humid weather over much of the Great Plains for the last several days has put a damper on... 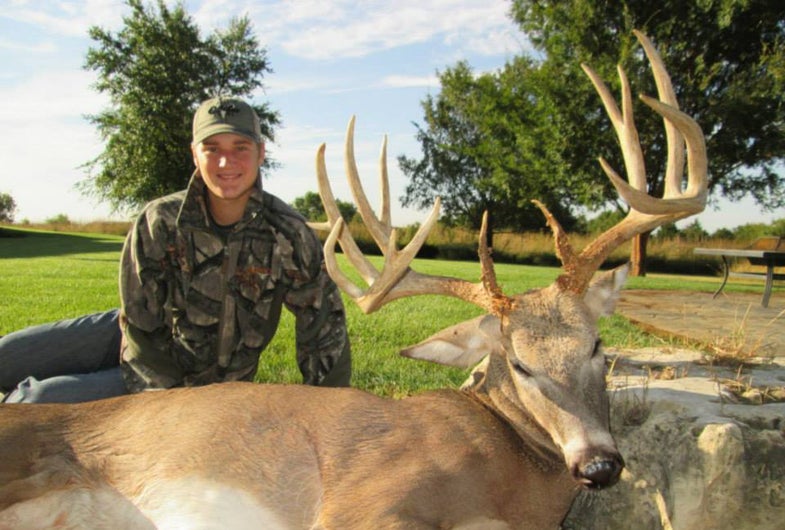 Lingering hot, humid weather over much of the Great Plains for the last several days has put a damper on deer movement. Most of the whitetails I see from my stand or on camera are active in the morning, and then mostly before shooting light, and they are still hitting acorns hard. I’ve been skipping evening hunts, because afternoon temperatures seem way too high for deer to be on the move before dark. A series of strong storms predicted to cross the region through the first half of the week should bring some relief–and might even stir up a big buck like the one here, tagged by high school student Hunter Giffin.

Giffin, of Sedgwick, Kansas, had been watching this Sunflower State whitetail for a couple of months by the time the archery whitetail season opened on September 15. Once the season started, the buck disappeared. Sitting in his tree stand on Saturday evening, September 20, Hunter had seen only a few small bucks as he watched a thunderstorm develop to the northwest. Amid the distant thunder and lightning, this dandy finally stepped out around 7 p.m.

Giffin usually hunts with a bow, but he had elected to use a muzzleloader this time because the buck was showing up in an area where it was impossible to get a stand or blind up in bow range. According to Hunter’s father, Kent, “When he was ready to shoot, he went to cock the muzzleloader and it would not cock back.” Several frantic text messages later, Kent was able to coach his son through the problem and Hunter made a good shot to bring down the 14-pointer. By the time they started trailing, the storm had moved into their area and father and son could find no sign at the site of the shot. They were about to quit for the night when Hunter finally picked up a blood trail and they were able to recover the buck. They estimate the 8×6 rack scores 192 inches gross.

Sometimes you just have to do what it takes to get that certain buck you have your eye on. Giffin’s willingness to switch to a muzzleloader and ride out a stormy evening allowed the young hunter to tag a trophy buck that he’ll be hard-pressed to top.