Overall activity status: Deer movement has been good to excellent across the region, thanks mainly to a sharp cold front—accompanied... 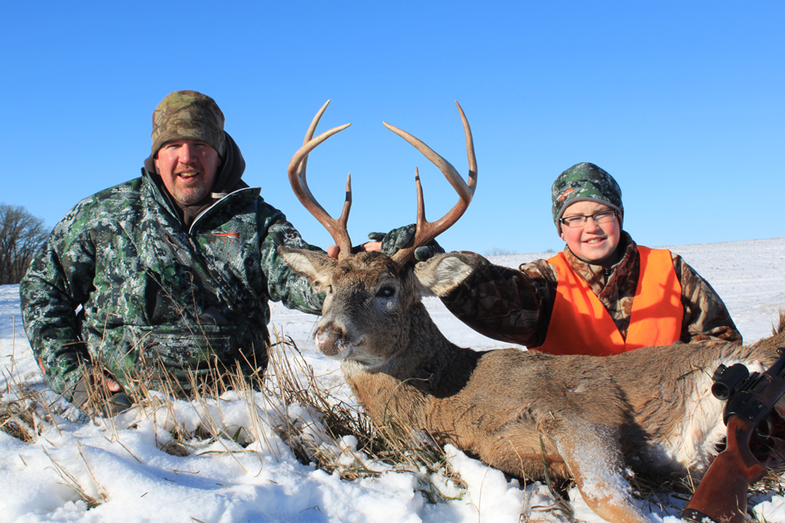 Overall activity status: Deer movement has been good to excellent across the region, thanks mainly to a sharp cold front—accompanied by snow, in some places—that blew in this week. I’ve hunted the last couple of days in wintry conditions and have seen plenty of deer up on their feet, feeding actively. Snow depths are light at this point, but the drop in temperature (it was 8 degrees Thanksgiving morning) has deer serious about finding food.

Rub making: For the most part, rub making has dropped sharply as bucks focus on chasing down does. However, my neighbor and hunting partner Dave Olson found a large, fresh, rub just this week near a stand he hunts frequently. The stand is located in a terrain funnel, so the fresh rub indicates a mature buck is still actively seeking does and advertising his presence as he does so.

Scrape making: I haven’t seen any new scrapes, but I have seen established scrapes getting worked frequently, by both bucks and does. On my recent Illinois gun hunt, my blind was situated 30 yards from a field-edge scrape under an oak tree. Three mature does and a young buck all stopped and spent many minutes working the licking branches above the scrape.

Fighting: Still no reports from hunters who’ve witnessed a fight. But broken tines and beams continue to show up on bucks seen and harvested by hunters. With breeding activity still strong, I expect fighting to continue.

Chasing: As noted in my last report, the chasing I’ve seen in the late rut has been some of the best in recent memory. We’re clearly on the backside of the breeding peak, but bucks of all ages are still actively pursuing does. This has made some for some excellent action for those hunters willing to brave the frigid conditions.

Estrous signs: I’ve seen two does being pursued by bucks (one in Illinois and one in Minnesota), and they weren’t working very hard to elude them. In my experience, this is a classic sign of a doe ready to be bred. There’s still breeding activity going on right now, and staying in the woods for as long as possible is still the best plan. The nippy temps make that challenging, but toughing it out can be worth the pain.

X-Factor: Weather. I sound like an echo chamber here, but the current weather conditions are a huge influence. We’ve had some cold temps and snow already, and if things moderate, whitetails are going to get lazy. As much as I hate to see winter come early, I’m praying it will stick around for another month to keep deer active. (January can be as warm as it wants!) My neighbor, 10-year old Tanner Mote, above, was hunting with his dad Alan the day before Thanksgiving when he shot this fine 6-point buck. It was a cold, snowy day, and sitting was anything but easy. But Tanner stuck with it and was rewarded with his first buck!