Crops, Deer Both Prime for Harvest

Let the games begin! It seems as if last year’s Rut Reporters just ended, and now it’s time to bring... 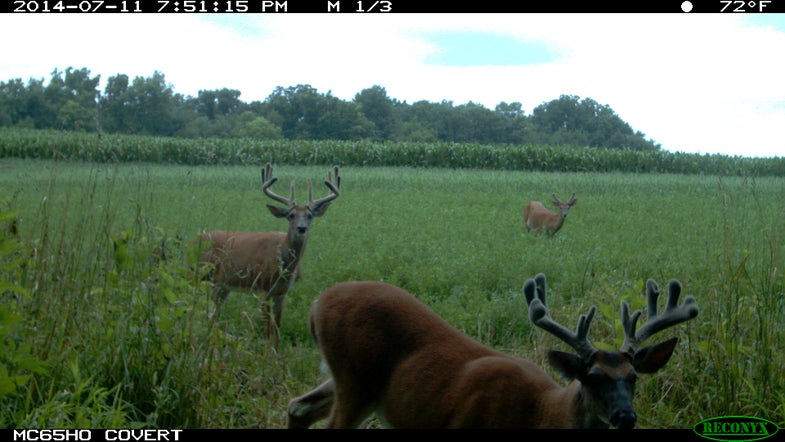 It seems as if last year’s Rut Reporters just ended, and now it’s time to bring you the 2014 version—one that I’m particularly excited about.

It’s normal, of course, to feel buzzed for the beginning of any deer season, but when last year’s season closed, there were some real causes for concern. Whitetail numbers across the North-Central region were generally down, thanks to many seasons of aggressive harvests along with major EHD outbreaks in two of the last three years. Toss in some brutal weather (the winter of 2013-14 was one of the worst on record in many areas) and many hunters were holding their breath.

But this fall is shaping up to be one worthy of excitement. Spring broke just in time for bucks to recover from winter and pour their energy into antler growth, and the summer fawn crop has generally ranged from solid to fantastic. There has been enough rainfall to ward off another EHD outbreak, and ag crops—particularly in Illinois and Indiana, states where farmers have suffered recently—are on track for a stellar yield. Those crops help feed deer (thanks, farmers!) and when they’re on pace, it translates into an on-time harvest that makes for better deer hunting. As the photo here shows, bucks are in excellent health, and the promise for a fine season this fall appears solid.

I’ve got an all-star lineup of guides and whitetail nuts throughout the North Central region that will help me deliver the latest news, conditions, tips and tactics that will help you have a great deer hunt this fall. But please do comment on and add to my weekly reports with your own observations, trail cam photos, and field pics. I value your input!