Overall activity status: Action is heating up across the Great Plains, with bucks starting to cover more ground and expose... 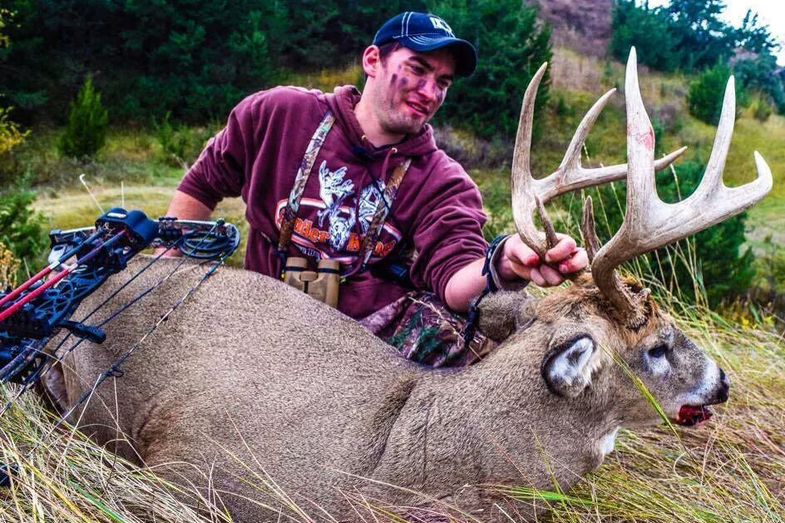 Overall activity status: Action is heating up across the Great Plains, with bucks starting to cover more ground and expose themselves during shooting hours. Mike Mancl of Milladore, Wisconsin, downed this South Dakota 8-pointer on October 10 during an epic stalk on Cedar Breaks Ranch.

Mancl and guide Ben Doty were hunting a treestand on a hillside point when they spotted the buck and several does half a mile away. After watching the buck work toward them and then bed down in a draw, they decided to take advantage of a favorable wind to try stalking within bow range. A couple hours later, Mancl and his cameraman closed within 18 yards to get a shot. The hunt will air on the second season of “The Breaking Point“, a TV show Mancl and partners launched last year on the Pursuit Network.

Fighting: Jerick Henley at Chain Ranch in southcentral Kansas reviewed 24,000—yep, 24,000—trail-cam photos recently and observed tons of initial sparring. “Lots of bucks are beginning to test themselves,” Henley says. “No serious fighting, but bucks are raking horns together at almost all my locations.” Derrick Law at Smoky Valley Shooting Sports says customers at the Lindsborg, Kansas, shop are likewise seeing some light sparring, with one hunter reporting success in rattling in a small buck. Jason Christensen of Nebraska Outdoor Experience saw bucks fighting earlier this week and thinks the battles will escalate quickly. Mancl also saw lots of fighting along the Cheyenne River in central South Dakota, including a couple of shooters that were bumping each other around. “Bucks are definitely sizing each other up and establishing a pecking order,” he reports.

Rub making: Law reports that hunters in central Kansas are seeing fewer rubs than normal this time of year, and they’re actually seeing more scrapes than rubs. Rubs are just starting to pop up in Nebraska, according to Christensen. Marc Casavan at Old School Barber Shop in Spearfish, South Dakota, says it’s a bit early yet for rubbing, which generally picks up in that state’s West River area toward late October. Most of the hunters stopping by his shop to show off trophy kills so far have been carrying elk and antelope.

Scrape making: Henley saw his first scrape of the season on Oct. 11, and it was the only scrape he turned up on a recent scouting foray. He expects that to increase with onset of wetter, cooler weather.

Daytime movement: Henley reports seeing more movement in general, including a 5-1/2-year-old buck he calls Browning (pictured above) that regularly passes one of his trail cameras during shooting light. Bucks that previously showed up on only one camera are now turning up a mile away on another, Henley says—a sure sign of early roaming in search of does. In all, daytime buck movement is accounting for about 20 percent of his trail-camera shots, with the rest coming after dark. Law says movement has been spotty, with a slight uptick in the last week as the weather has cooled, and much the same is happening in Nebraska, where Christensen says bucks are taking advantage of this year’s lush vegetation to stay hidden during the day. Mancl’s South Dakota buck was one of several he spotted out sunning on a southeast hillside the first morning of a cold spell—a pattern he has observed consistently on cool, calm mornings.

X Factor: Crops continue to be the wild card in farm country. Though corn is long gone from southern Kansas, Henley reports that the winter wheat is up. Acorns are still widespread, but once they decline, deer should be piling back into cropfields to feed on waste grain and green wheat. Central Kansas has harvested most of its corn, too, but the milo harvest is just gearing up, and lots of bucks will continue hiding out in uncut milo fields until forced to move. Hunters in those areas are seeing less deer movement than those where the harvest is farther along, Law reports. Be patient: Heavy recent rains could keep combines out of fields for a few days.