Deer Activity Hits a Lull, but A Trophy Is Felled Anyway

Overall activity status: Midweek marked a calm period between last weekend’s cold front and the drenching that remnants of tropical... 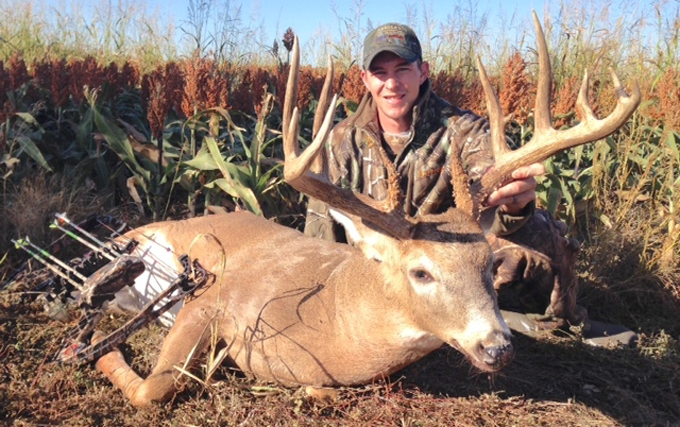 Overall activity status: Midweek marked a calm period between last weekend’s cold front and the drenching that remnants of tropical storm Simon are predicted to dump on Kansas and Nebraska at week’s end. But balmy temperatures and a bright moon didn’t hamper Curt Frazell from tagging the buck pictured here, which he discovered for the first time in late September. He took the time to study the terrain and formulate a plan, and it paid off with a successful hunt on his first sit. As reported here last week, Frazell, from southeast Kansas, pulled a trail cam card on September 30, discovered the photos (one is below) of a promising buck, and reported that “A new quest has begun.”

That following weekend he studied the property—for which he’d just recently acquired permission to hunt—by reviewing aerial photographs and driving the perimeter. He identified a likely feeding area (a picked cornfield near his trail camera), and a likely bedding spot (an unharvested milo field with standing water separated from the corn field by a railroad track). “I found a good tree that I would be able to slip in, with the railroad tracks blocking the buck from being able to see me,” Frazell says. “This allowed me to literally slip right into his living room without him knowing. Monday evening I got a south wind and headed for the first crack at what is my biggest buck to date.” About 7:15 p.m. Frazell heard the buck walking 50 yards away and figured he’d been bedded nearby all afternoon. The 12-pointer closed to within 10 yards before Frazell took a quartering away shot to clinch the deal. The gross score is projected in the 170s, and he hopes the symmetrical rack will keep deductions at a minimum, yielding a net score that will give him his first Boone & Crockett buck.

Curt’s story is instructive because it reminds us that it’s not enough to pinpoint a buck’s location: You also have to find an ambush spot you can get in and out of without spooking the deer. By using the elevated railbed to screen his sneak, Frazell was able to get between the buck’s bed and food.

Fighting: Several reports came in this week of low-level sparring, but no one is having any luck attracting bucks with grunt calls or rattling.

Rub making: Most reports are of light rubs, but I was pretty excited to find a big fresh one this week off of a corner of a picked cornfield.

Scrape making: Curt’s brother Clete reports seeing a small scrape during a hunt with his 4-year-old son in southern Kansas. Martin Kelsay of Hunter’s Headquarters in Auburn, Nebraska, says he’s seeing small scrapes just starting up along field edges. Kelsay says general deer activity has been the slowest it’s been all season in eastern Nebraska, with very few photos of big bucks showing up on his trail camera.

Daytime movement: Kelsay and his son Joel noticed a big drop in activity on their trail cameras this week, and noted that the deer activity observed while on stand was slower that it has been all season. Others are seeing mostly does and fawns, and then mostly at dusk and dawn.

X Factor: Combines are rolling across much of his area, Kelsay notes. “There’s gonna be a lot of crops leaving in a hurry,” he says, “but we really need a cold snap to get the deer moving.” The forecast does call for below-average temperatures in the upper Great Plains by Friday, but locally heavy rains (as much as 4 to 6 inches predicted in Kansas) could put a damper on hunting farther south until the weekend, when lows in the 30s should increase the prospects for some daytime movement.