Overall Activity Status: Deer movement, and hunter activity, on the Great Plains has markedly increased over the course of the... 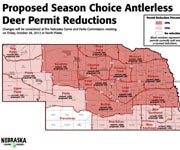 Overall Activity Status: Deer movement, and hunter activity, on the Great Plains has markedly increased over the course of the prior week. Several of my contacts have noted previously unseen deer have started showing up on their game cameras, giving hunters hope that not all the bucks have been lost to EHD*. Early corn harvests and short-term forecasts calling for cooler temperatures and some much needed rain will put even more deer on the move in the coming week.

Fighting: As I predicted in a post last week, bucks are starting to test out their newly hardened headgear. In eastern Kansas, Brenden Mick of Twin Chimneys Outfitters noted he’s seen some smaller bucks pushing each other around. Same goes for Denton Rich of Mule Creek Outfitters near Greenburg, Kansas, who saw bucks sparring for short periods of time last week. Interestingly, Justin Smith, who hunts in south-central Nebraska, remarked that one of the bucks he’s been watching is already sporting the negative effects of September sparring, showing up on camera with a busted G2. Whether this is the sign of earlier rut or not is open to discussion.
**
Rubs/Scrapes**: Scrapes are not only showing up, but also offering a great place to tag a buck. In southwest Kansas, Rich noted that several rubs and scrapes have popped up there recently.

Daytime movement: The last week has still been fairly warm, with daytime temperatures reaching in the 80s and 90s. This seems to have kept deer movement relegated to the early morning and late afternoon, with activity dropping off quickly as the temperatures warmed up. Agricultural activity may bump some deer from their beds during the day, but they won’t travel far before holing up again until afternoon temperatures start dropping.

Estrous signs: You might think it’s way too early for does to be exhibiting any signs of estrus, but just across the Nebraska/Colorado border, Ryan Wieser caught a small buck trailing a doe on video last week. Could have just been a coincidence, but maybe it lends some credence to those in the early-rut camp.

X Factor: If there’s any silver lining at all to the ongoing drought, it’s the early corn harvest. In more typical years, archery hunters often have to battle standing corn where deer hole up until they’re forced out by combines in late October or even November or later. Not this year, across the Great Plains farmers are cutting drought-stressed crops earlier than ever. In Kansas, my contacts are reporting that 99 percent of the corn there has been cut. Though farmers in Nebraska and the Dakotas aren’t quite that far along, they are weeks ahead of schedule. Hunters should keep a close eye on the fields bordering their hunting areas, and plan on hunting, or at least checking game cameras, in the days immediately following harvest in hopes of getting a glimpse at some of the bucks that disappeared this past summer.

*EHD Update: Nebraska hunters should note game managers at the Game & Parks Commission have recommended a reduction in the number of antlerless permits available to hunters this fall. The proposal won’t get voted on until the Commissioners meet on Oct. 26, meaning any permits purchased before then will still be valid. To find how this might affect your hunting plans, click here for more information about EHD in Nebraska.