Some of the season’s best action—that renewed surge of buck activity that many call the secondary rut—is still a week... 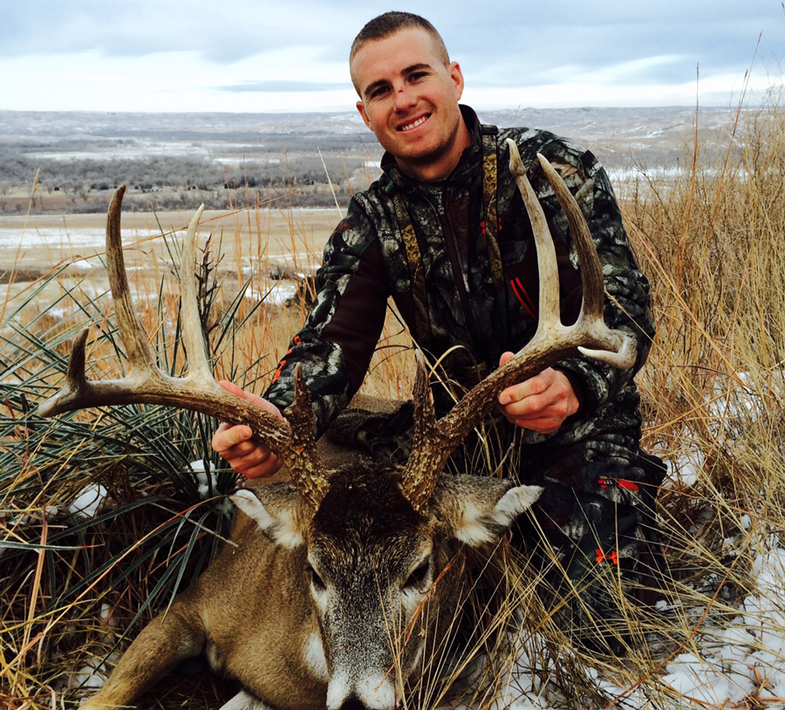 Some of the season’s best action—that renewed surge of buck activity that many call the secondary rut—is still a week away in South Dakota, according to guide Ben Doty of Cedar Breaks Ranch.

“We’re in the low period after the peak right now,” Doty said Tuesday, “and we probably won’t see those big boys up on their feet for a week and a half. They’ll pop back up and start chasing hard and heavy, but they’re gonna take a nice nap here for a week or so.”

Doty notes that when mature bucks get their second wind, they can be just as intent on the late-cycling does as they are during peak breeding. A story about his recent firearms hunt with client Ethan Edwards illustrates just how vulnerable that can leave these normally wary whitetails.

In late November, Edwards came to Cedar Breaks from Indiantown, Florida, for his first ever prairie rifle hunt. A bowhunter at heart, Edwards usually hunts South Dakota during the September archery opener. Late arrival nixed his plans to shoot his rifle the day he arrived, so he and Doty headed out the first morning with plans to scout and then head back to camp to shoot a couple of rounds to make sure the scope was still dead on before hunting that afternoon. But those plans changed when they spotted the 156-inch buck pictured above. The buck was pushing does in a cornfield before disappearing into a river-bottom maze of draws. When he reappeared, at 302 yards, Edwards felt confident enough to take the shot. He missed high, but then got another chance when the buck, apparently unperturbed, trotted 30 yards closer. He missed again.

“On the first shot, I really held onto the gun, but after I missed I was doubting myself,” Edwards says. “I thought maybe I pulled it. So on the second shot I didn’t hold on as tightly as I should have, and that’s how I got my nice scope nose.”

Says Doty, “He looked at me and it was just pouring blood. I thought he damn near broke his nose. When we came back the next morning, we could follow Ethan’s blood trail.”

Come back they did—and found the buck just a few yards from where they’d seen it the day before, now intent on a hot doe bedded beneath a cedar.

“He just stood and stared at her; he wouldn’t take his eyes off her,” Doty says. “What it looked like to me, he was sleeping on his feet, he was so tired. His head would start sagging, lower, lower, lower, then he’d snap it back up and look at that doe again before his head started drooping. He was tired, but he didn’t want to lie down because he didn’t want to lose that hot doe.”

With the big deer focused like a laser beam on the bedded doe, it was a fairly simple matter for Edwards to circle the 600 yards to get into position for a 158-yard shot, which crumpled the buck where it stood. The rack measured 156 inches, with an impressive 22 3/8-inch inside spread.

“I was maybe three feet from where I shot at him the first time,” Edwards says, grateful—and a little amazed—by his second chance. “I could have reached over and picked up the brass from the day before.”

Doty says it just shows how the rut presents the best opportunity to see big mature bucks that are scarce the rest of the year. “That week I saw three bucks I had trail camera pictures of last year, but not a single picture of this year,” he notes. “As they get older and smarter, they only show up when the does are hot. And once they find a hot doe, they’re probably not going to move far when they’re both worn out from running. When she’s ready to stand, they might stay in the same spot a couple of days without moving.”