I had a few friends over for dinner the other night and, of course, we got to talking about deer... 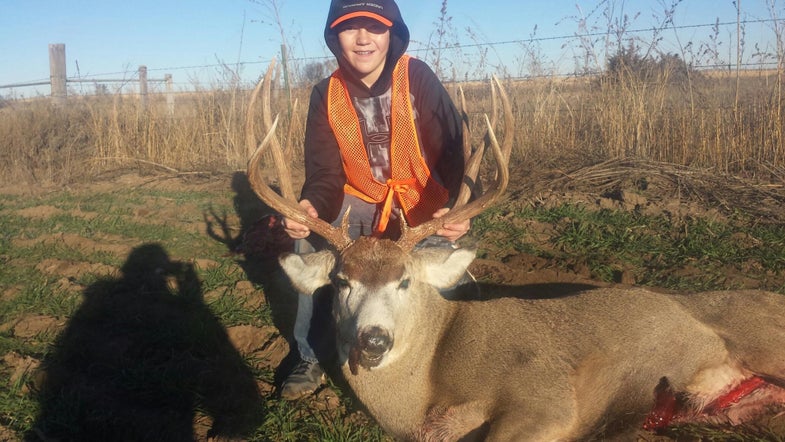 I had a few friends over for dinner the other night and, of course, we got to talking about deer season. My friend Phil was still high over the 170-inch whitetail he had killed in Kansas the week before. Still, he couldn’t help but wonder about the even bigger buck he had on camera—one that he thought would go 190 or better. When I mentioned I felt there had been a lot of big bucks reported this year, Phil agreed and promptly showed me photos of two different 200-inch mule deer that had been killed in recent weeks.

Now, a 200-inch mule deer is news anywhere, but on the Great Plains, they’re as rare as unicorns. These two had been tagged in Kansas and Nebraska Panhandle. Combine that with several other great mule deer bucks taken, including the one above taken by Dave Chase’s stepson, and some slammer whitetails, and it’s clear this has been of the best years in recent memory for the size of bucks killed, if not the overall number of deer killed.

I’m not alone in this assessment, as several of my contacts consider 2015 one of the best years for buck opportunities in the last five. Here’s Dylan Tramp from South Dakota and his thoughts:

“I definitely agree with your comment about more quality bucks being taken this year as opposed to the last few years. In my area of southeaster South Dakota in 2012, we got hit with EHD very badly, taking out a significant chunk of our deer population. With fewer deer in the area, it’s a numbers game. Your chances of filling a tag are obviously greatly reduced. Now that three years have gone by, I would have to say that the deer population in South Dakota is healthier than ever. Many hunters simply didn’t hunt after EHD and the number of rifle/gun tags issued were greatly reduced in 2012, 2013, and 2014. The bucks that did survive EHD were at a minimum of 3 1/2 years old this hunting season. We have above-average age structure this year as compared to past years. I believe that is why so many quality deer were harvested this year. I don’t know if it is official yet, but I saw two bucks harvested this year that will both potentially break the current South Dakota state record. One was an archery deer taken in the first week of the season, while the other was an east river rifle deer shot just this past weekend. Both will be scored as non-typical.”

Tramp makes a great point about the effects of EHD on deer herd’s in the Great Plains. While opportunities have definitely been reduced across the region, numbers are on the upswing. So is hunter participation after a few down years. Of course, a lot of the health of the herds, and the phenomenal antler growth reported, is due to the incredibly wet spring we had this year, as well as last year’s wet fall and mild winter. Deer survival rates are up, and bucks were in great shape coming into the deer season. So, while the rut itself was protracted, and according to some hunters almost non-existent, bucks that did present themselves to hunters were of trophy quality.