Significant chunks of the Midwest seem to have a poor or nonexistent acorn crop this fall. The culprit, I believe, … Continued 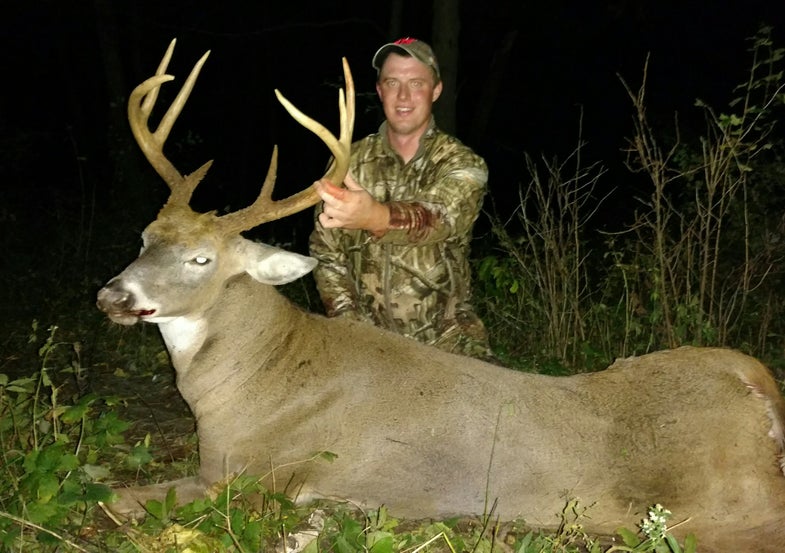 Significant chunks of the Midwest seem to have a poor or nonexistent acorn crop this fall. The culprit, I believe, is a hard frost that hit last spring, just as oaks were flowering. I’ve been hunting southeastern Minnesota for 30 seasons, and I can’t remember a fall with a near total acorn crop failure, until now.

Yet, the lack of nuts has resulted in some fantastic hunting in and around food plots and farm fields. Last week, Deputy Editor Dave Hurteau shot a great 10-point while hunting with me; the bucks (Hurteau’s 10 was leading a pair of yearlings) were enroute to soybean and alfalfa fields that bordered my hunting property.

Then, the other night, I was fortunate enough to be part of a tracking / dragging team for another fantastic buck. My friend Steven Koenen, a physician’s assistant from LaCrescent, Minnesota, tagged a buck he’d been after for two seasons. Steven had hundreds of trail cam photos of the heavy-racked 8-point, and was lucky enough to pick up his sheds last spring, in the very food plot where he shot the buck. Judging from his years of encounters with the deer, Steven feels the buck is probably 6-1/2 years old, and I don’t doubt him.

In a normal mast year, a buck like this would likely have spent most of the early fall feeding effort gorging on acorns. But this year’s mast failure forced him to look for other options, and Steven (and his wife, Melissa, who was in the blind with him when the buck appeared) was waiting in the right food plot at the right time when the old warrior came out for a snack. Reports from hunters in Wisconsin and Michigan indicate a poor acorn year there as well, so focusing on green food sources should be a solid strategy for this fall.