Grunting Draws in a Book Buck

Hunting has been tough here in Kansas, as I found out yesterday during an eight-hour sit at two different stands... 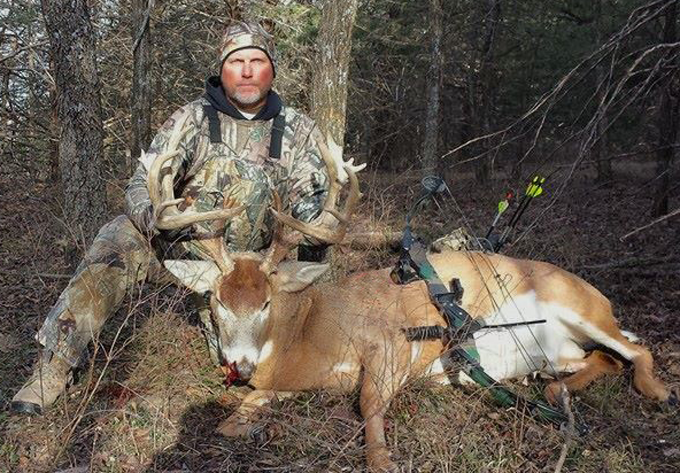 Hunting has been tough here in Kansas, as I found out yesterday during an eight-hour sit at two different stands that produced sightings of only two does and no bucks. But some big deer are still being taken, including the giant in this photo, shot December 1 by Todd Gast of Higginsville, Missouri, on family land in Kansas.

A lineman for a rural electric co-op, Gast says he always takes off the week after Thanksgiving to hunt the last few days before the Kansas rifle season, which traditionally kicks off on December 3. The northeast Kansas farm where he hunts has been good to his family in the past: Several of his brothers-in-law have taken Booners; Gast himself has shot 150-class bucks, but the true trophy has always eluded him—until now.

“I’ve spent a lot of time chasing deer, and I’ve asked myself, why can’t I shoot one of those?” Gast says. “I’ve passed on quite a few bucks over the years, waiting for a big one to come in. It finally happened.”

On the morning of the 1st, Gast set up in a narrow transition area from bed to feed. The buck responded to his grunt call, which Gast used after the deer had walked toward him but balked at a fence line before wandering off into a stand of cedars. After hearing the call, the buck returned to the fence and stood there for two or three minutes before it jumped the fence and came straight toward Gast. He made a clean double-lung shot at 15 yards with a bow that he’s owned since 1993.

“It’s an old PSE I bought out of the back of a gas station and it’s always worked for me,” Gast says. “I got married and had kids and started buying them bows, and I just decided to get along with the bow I had. I’ve been talking about getting a new one for four or five years.”

This is the year it’s going to happen. “My wife and I decided before the season started that I’d get a new one,” he says. “I’m going to hang this one on the wall of the shop.” And he’ll have a most impressive mount to go with it: Gast’s taxidermist expects the rack to net around 205 inches.

Signs are that the secondary rut may be about to kick in. A customer of Smoky Valley Shooting Sports in Lindsborg, Kansas, shot a 206-inch giant Sunday. Brandon Boldra, manager of the shop, says the buck was taken near a food source while following two does. “It was obvious that one had to be close or into her second (estrous) phase,” Boldra says. “Typically it’s a little later than this, say around the 10th, when the second rut happens, but there’s always going to be a few does that come in early, just like there are some early does that are ready by late October.”

In general, Boldra and others say, daytime sightings have been minimal since the opening of rifle season on Wednesday.

“Most groups are not seeing much movement,” Boldra says. “It’s been tough, with the rain we’ve been having and with the full moon going down right at first light.”