Overall activity status: With high temperatures and an incredibly bright moon, daytime deer movement is near nil in the region,... 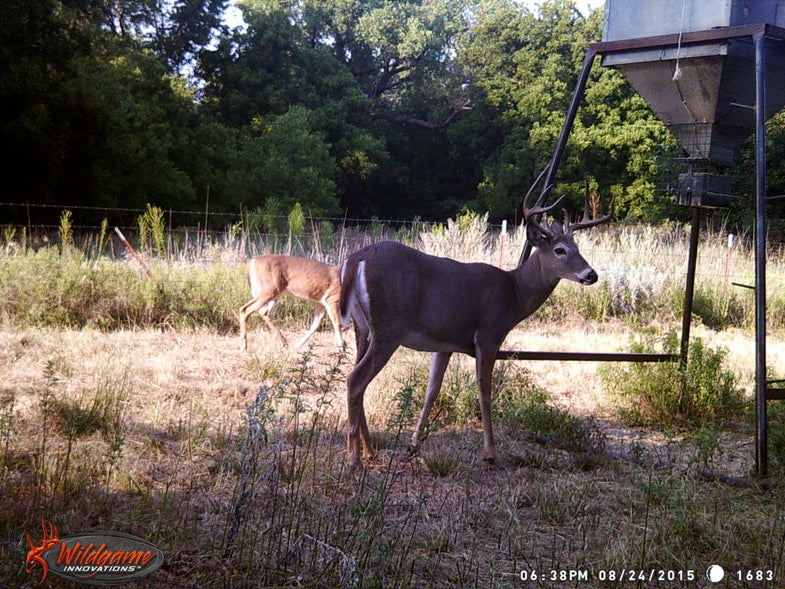 Overall activity status: With high temperatures and an incredibly bright moon, daytime deer movement is near nil in the region, but some bucks have been showing up after dark. And, not surprisingly, there’s been a pretty even mix of hard-horned buck and those still in full velvet. As we come off the full moon, I expect more shedding bucks to show up. Down in southern Kansas, Jerick Henley checked in from the Chain Ranch to report he’s had a hard-horned buck on camera for awhile now: “This is a pic of the first buck we got on camera that lost his velvet on or about August 23,” said Henley. “He’s the only buck I’ve seen hard horned through the 29.”

Sparring: None reported, but I expect small bucks will start tickling antlers as more velvet sheds.

Rubs: With a few hard-horned bucks on camera, rubs will start to appear soon.

X-Factor: After a relatively mild summer, hot weather has set in across the Great Plains. Not even North Dakota can escape, with temperatures forcasted to flirt with the century mark in Bismarck on Thursday. That has put the brakes on any deer activity that may have spiked late last month as millet harvest started up. I quizzed my UPS driver just this morning, and while he reports excellent pheasant broods in the area and clued me into a good antelope buck worth investigating, he hasn’t seen any deer movement for a week. Luckily, it looks like temps will start to break next week. That, combined with shedding velvet, should give bowhunters in the area a reason to get excited as opening day approaches.