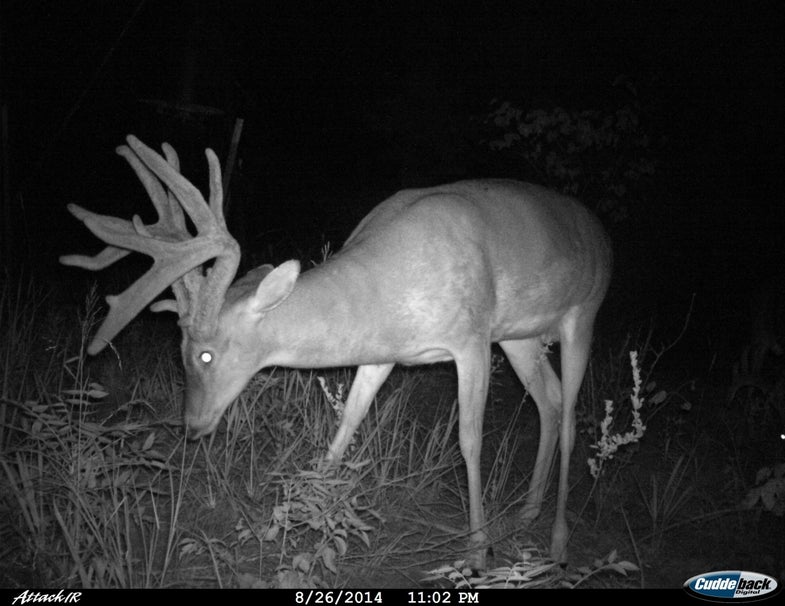 Overall activity status: Bucks are still in bachelor groups and following a typical late-summer bed-to-feed pattern, with daytime movement severely restricted by a heat wave that sent temperatures into the triple digits across the southern part of the region.

Fighting: The vast majority of bucks are still in velvet, although Jerick Henley of Chain Ranch Outfitters in south-central Kansas did report seeing one small buck already in hard horn on August 24. He expects that to start changing in the next week, as big boys like the Kansas buck in this trail camera photo start shedding velvet and testing out their new hardware.

Rub making: No rubs yet, although that should change as the velvet starts to come off.

Scrape making: None yet.

Daytime movement: Hot humid weather across much of the region means deer are seeking shade during the day and moving mostly at night. That could change in a couple of days if a predicted cold front rolls through. Nebraska bowhunters taking advantage of the state’s earlier archery start could see autumn-like temperatures and a spike in deer movement just in time for the first weekend of the new season.

X Factor: The corn crop. Nothing so drastically alters deer habitat and hunting strategies across the Great Plains as combines munching through cornrows. Yes, scorching temperatures (which have hovered around 100 in Kansas for the past two weeks and have been above average across most of the region) makes setting stands and checking trail cams a draining chore, but those hot, dry conditions also push this year’s record corn crop closer to harvest. About seven percent of fields in Kansas have already been cut, while abundant rain has the crop in Nebraska and the Dakotas still lush and green. Be sure to monitor the harvest timing at your hunting spots, and make plans to hunt as soon as possible after the combines roll through.