Overall Activity Status: With the peak of the chasing phase in our rearview mirror, hunters are seeing sporadic buck activity.... 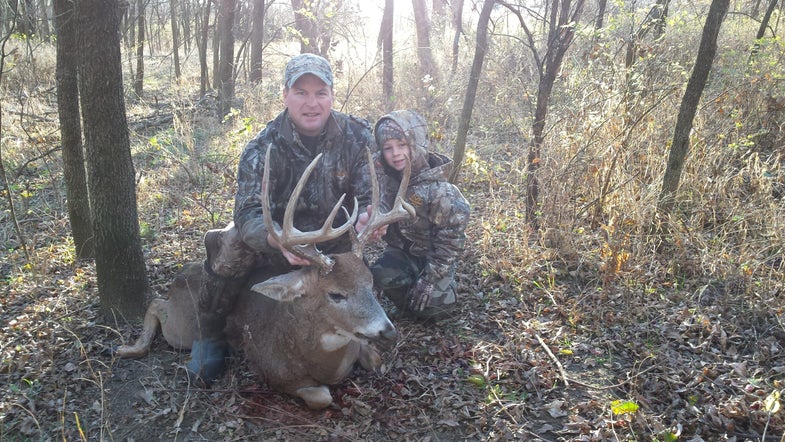 Overall Activity Status: With the peak of the chasing phase in our rearview mirror, hunters are seeing sporadic buck activity. From southwest Kansas, Buckventures host Jeff Danker is reporting that many of the big deer are mostly locked down. “Lots of young deer cruising and messing with does,” Danker said. “But we are starting to see some mature deer break loose from their doe and go to look for another!”

Sparring: None reported, but hunters are seeing lots of deer showing the effects of rut-related activity, including lots of broken tines.

Rubs: Rubs have gone stale as bucks concentrate on finding does instead.

Scrapes: Like rubs, scrapes are cold, though you can bet bucks are still checking them.

Chasing: Last week, Nathan Oehlert watched rut activity ramp up in central Kansas. “Between me and all my buddies we have seen a lot of chasing this last week,” Oehlert said. “It seems as though there is either a hot doe in your spot and you see all kinds of deer, or there is a hot doe somewhere else and you don’t see much. It has either been really good or really bad for us this last week. Several of my friends killed good ones. I did see a mature buck today that definitely appeared to me to have just got done breeding a doe. I can’t be certain but his body language led me to believe that. He was just kind of moping around by himself not really paying much attention to anything.”

Estrous Signs: “We look like we are in peek breeding right now,” said Henry Obermeier, who’s hunting in central Nebraska this week. “Lockdown as we call it. Had a buddy stick a 160-class 5×5 yesterday morning out of a breeding party. Six bucks on one doe. Couple other guys have seen big bucks cruising one day then they show back up three to four days later.”

X-Factor: While hunters fear lockdown, it can actually be a great time to hunt as the scent of a hot doe, even one locked down with a buck, will have other deer out cruising with their noses to the ground. Clete Frazell caught this nice Kansas buck doing just that:

“I got lucky in Thursday morning and harvested this buck,” Frazell said. “I saw him cruise by at 50 yards right at shooting light. I grunted at him as he went out of sight to avoid being spotted in the tree. It seemed as if he wasn’t going to respond as he went out of sight. I stood waiting for another 10 minutes with my bow in hand and finally decided he wasn’t coming back. I hung my bow back on the hanger and sat back down. About 10 minutes later I saw him cruising back my direction through some saplings. He entered my shooting lane a few seconds later and the arrow was true at 15 yards. He stumbled and trotted 10 yards and I decided to arrow him again. After the second arrow exited he started to sway and crashed 25 yards from me. My son Gage and my dad, Kent, got to get in on the recovery and it was a great hunt and great day. Now another taxidermy bill is the end result to this magical hunt.”