It’s Now or Never for a Pre-Rut Buck, and One Kansas Hunter Says “Now”

Sometimes you have to take the hunt to the buck, as Derrick Law proved with this nice 12-pointer harvested October... 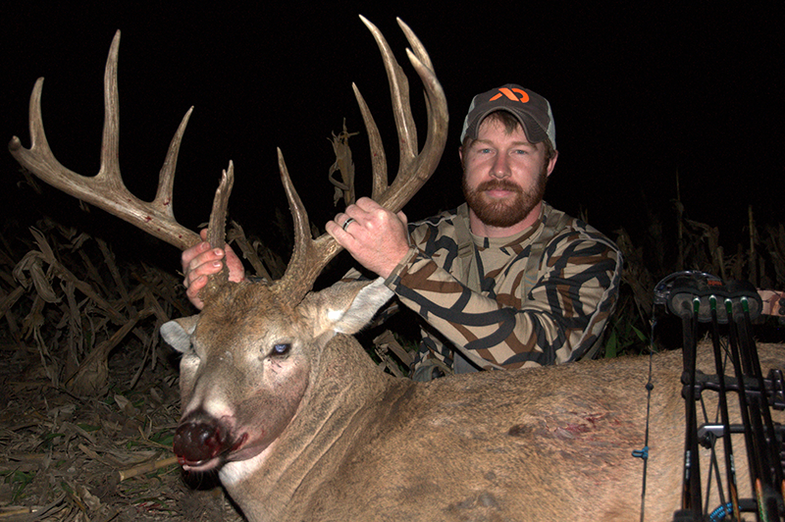 Sometimes you have to take the hunt to the buck, as Derrick Law proved with this nice 12-pointer harvested October 5 in central Kansas. An archery tech at Smoky Valley Shooting Sports in Lindsborg, Law fashioned a homemade blind from cattle panels and cornstalks to close the distance on this 172-inch mainframe 10 after watching the buck entering a cut cornfield from a bedding area.

Law had trail camera photos of the buck in velvet all through the summer. Then, two weeks before opening day, nothing. “I went from getting 3500 pictures every two weeks to getting no pictures at all of this deer in hard horn,” Law says. “I thought he was gone.”

Using a ground blind in a waterway near a cornfield “more to scout than to hunt,” Law spotted the buck right after sunset one September evening. Because the buck was going to the cut cornfield directly from a bedding area, a treestand wasn’t an option. Law sat in the cornfield without a blind a couple of times; he saw the buck once briefly at 40 yards and twice at 70. After watching the deer enter the field at the same spot multiple times, Law sawed down two cattle panels to a height he could shoot over while on his knees and set up a makeshift V-shaped blind brushed in with cornstalks about 40 yards from where he saw the buck hitting the field. On his second sit, the buck showed up right on schedule just after sunset and presented a broadside shot at 35 yards.

“He was coming through a very similar area at a very similar time of day over a month stretch,” Law says. “He was very consistent. We were getting worried that it’s getting closer and closer to where bucks are going to be roaming to look for does.”

What I like about Law’s take-charge approach is how he balanced aggressiveness and caution. He had the buck at 70 yards twice, but passes on shots that are beyond his comfortable range—”a pretty fair poke on a deer,” as he says. When he did move closer, he didn’t get greedy, setting up at 40 yards when a lot of folks might have gone for 20. Best of all, he didn’t let the lack of a tree stand hold him back, but devised a novel DIY fix to his dilemma.

“I was a bit surprised he kept coming to that same spot, but a lot of the bigger deer stay alive by doing the same thing over and over and over instead of changing their habits,” Law says. “And I don’t believe it was going to be that way that much longer.”

The final lesson from Law’s hunt: Don’t give up on a spot solely based on trail camera data. They have their limits. “Just because you don’t have something on trail cam doesn’t mean that something isn’t there,” Law points out. “I thought he was gone, and then he wasn’t.”

Law says daylight deer movement in central Kansas has been pretty slow, though things are picking up a bit with the onset of colder weather the past few days.