It’s Round One in the Deer Woods

Overall activity status: As we get closer to October, daytime sighting of big bucks is generally on the decline, but... 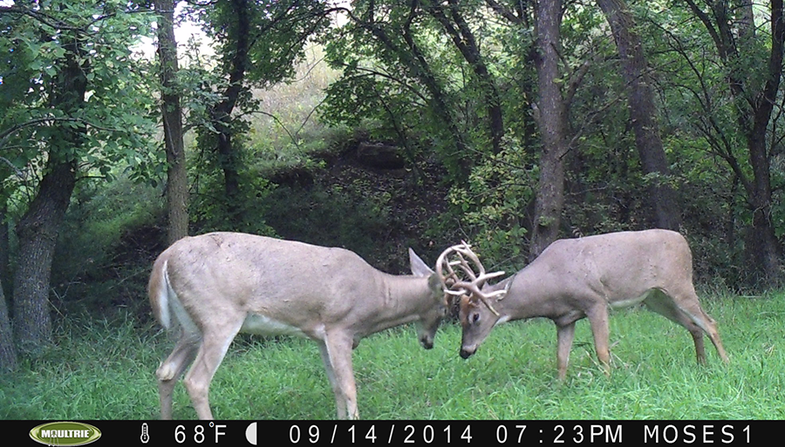 Overall activity status: As we get closer to October, daytime sighting of big bucks is generally on the decline, but more signs of the coming rut are starting to become evident in the field.

Fighting: Sparring has begun. Kim Sherman of Lil’ Toledo Lodge near Chanute, Kansas, says his hunters have seen and heard some light sparring—mostly young bucks squaring off—but at least one of these battles was a serious scrap. South Dakota bucks seem to be on the same schedule. “I finally saw the first fighting of the year, and it actually seemed pretty meaningful,” Spencer Neuharth reports. “I can’t imagine these bachelor groups will be hanging together much longer.” In fact, this trail camera photo from South Dakota suggests the sparring has been going on since at least mid-September, and it’s sure to accelerate from here.

Rub making: Rubs are popping up all over in southeastern Kansas, Sherman says, and not just from mature bucks. “The little bucks get caught up in it and go crazy too,” Sherman says. “We’re seeing rubs of all sizes.”

Scrape making: Some scrapes are starting develop in South Dakota, Neuharth says. “They don’t look like they’re frequented very often, but they are there.” I’ve noticed the same situation in Kansas, where a few hints of small scrapes are evident on one of my hunting areas. Sherman hasn’t noticed any scrapes, but he has observed a mature buck scent-checking does and following them around. “I think he had a pretty good memory from last year and was just wishing,” Sherman says. “It doesn’t hurt to try.”

Chasing: Nothing serious yet.

Daytime movement: Daytime movement has dropped off since the last cold snap, Neuharth reports, but a cool morning early in the week did spur some in Kansas, where bucks are still tolerating one another in bachelor groups as they transition to acorns. Martin Kelsay of Hunters Headquarters in Auburn, Neb., says his daytime sightings have been confined mostly to young bucks, with more sightings during mornings than in afternoons. Kelsay had been seeing bucks in groups until last weekend, but every deer he’s seen since then has been travelling alone.

X Factor: The impending harvest is the big wild card in South Dakota, Neuharth says. “After that, the deck will be reshuffled and deer will be moved around.” That’s already happening across the region in areas where abundant mast crops have bucks spurning crop fields for the oak woods.