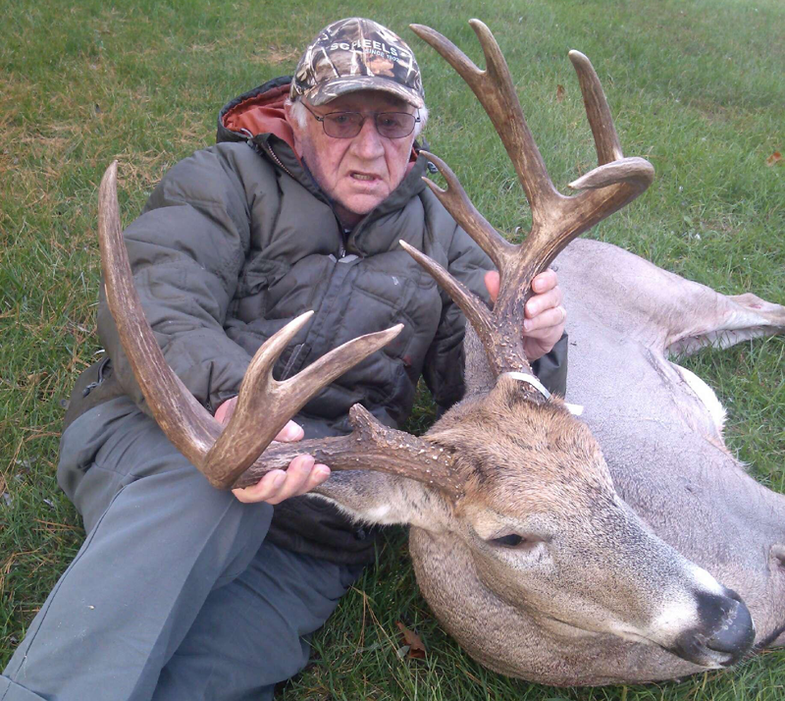 Overall activity status: Deer movement now is a little erratic. Al Caron, a Wisconsin hunter enjoying the state’s first crossbow hunt, tagged the 13-point giant pictured here—the buck should gross in the high 160s—as it visited a soybean field last week. Caron had a chance at even bigger buck just a few days before, but the deer didn’t present a good shot.

That said, other hunters are reporting fair-to-good doe movement, with bucks (especially mature animals) far less cooperative. Not surprising, considering the tremendous transition the region is experiencing in terms of food sources and cover changes.

Fighting: As I’ve noted in previous posts, my trail cameras are capturing sparring and fighting matches, so bucks are definitely feeling their oats and testing each other out. The fights I’ve documented don’t seem to be serious affairs, but a contact in Wisconsin called to say a buck he’d been watching since summer, a 150-class 10-point with double drop tines, walked within easy bow range last week…and one side of his rack was completely broken off. So obviously some skirmishes are turning ugly.

Rub Making: Rubs are generally on the rise, but not keeping pace with the increase in the number of scrapes, for some reason. I expect to see more and bigger rubs next week.

Scrape making: There has definitely been an increase in the number of scrapes lately, especially along field edges and other food sources. Last week I found a fresh scrape line along a secluded cornfield edge, and immediately hung a camera. Four days later I checked the card, and the buck—a nice 9-point—had hit the scrapes three of the four days (though never during shooting hours).

Chasing: Nothing serious to report. Some yearling bucks nudging does at food sources.

Daytime movement: Generally strong, though (as mentioned earlier) mature bucks are not exposing themselves often. The generally strong acorn crop in the region is probably to blame. Older bucks almost always prefer feeding in a discreet food source, and nothing keeps a deer hidden better than an oak stand.

X-Factor: The annual crop harvest is underway across the region, and as noted in previous reports, will continue to affect the location, movements and feeding patterns of whitetails on an ever-shifting basis. Hunting pressure will have localized effects as well; archery, small game and waterfowl seasons are all under full swing now. Expect to see altered deer movement in areas where a sudden influx of hunters will alter whitetail behavior.