Persistence and Patience Pays Off in South Dakota

It’s easy to get down on yourself after whiffing a shot, especially on a trophy mule deer. I’ve heard stories... 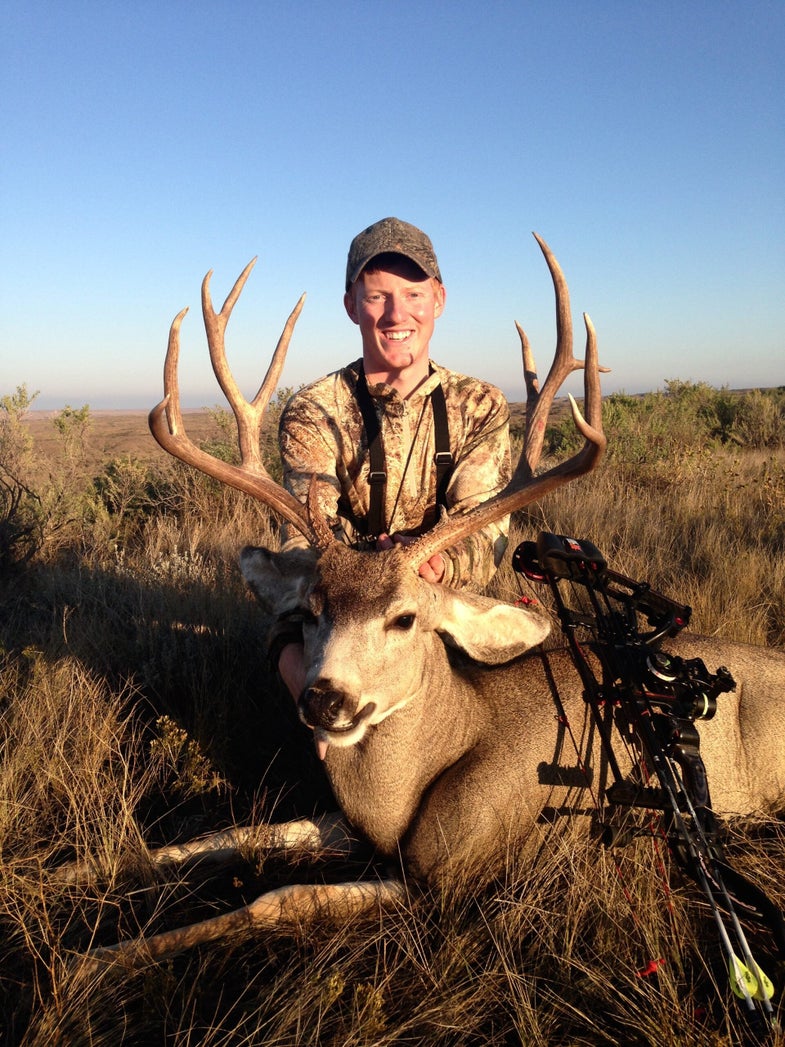 It’s easy to get down on yourself after whiffing a shot, especially on a trophy mule deer. I’ve heard stories of misses that caused the hunter to give up for the day—or even the season. It’s the true measure of a hunter who keeps hunting hard until the last bell rings. It’s that kind of persistence, along with some patience to wait out a bedded deer, that helped South Dakota hunter Dylan Tramp tag this nice trophy with his bow last week.

Tramp tells the story of how it all went down:

The hunt took place in the far northwest corner of South Dakota beginning on opening morning, September 26 through September 30. Throughout the trip, bucks were still in bachelor groups and daylight activity was plentiful. I saw several mature mule bucks on their feet well into midmorning. On day two, September 27, I had an opportunity at a 150-class mule deer, however, I got busted settling into position. The buck had me pegged. His curiosity brought him a little closer as he tried to distinguish exactly what he saw moving through the sagebrush.

Just before he made his run for the hills, I judged the yardage to be around 40 yards and took the shot only to watch helplessly as my arrow flew right under his belly. After this thrilling encounter, I was down on my luck and felt sure I wouldn’t get another opportunity such as this. Several days went by without bedding a single shooter buck. I was left kicking myself for missing my golden opportunity. Thankfully, my luck took a turn for the better on the last day of the hunt.

It was fast approaching midday without an opportunity materializing. I decided I would scan one last draw before heading back to the truck to put together a new game plan for the evening’s hunt. I glassed over a small ravine for about 45 minutes, checking every sage bush and cut bank for any glimmer of an antler or flicker of the ear. I was ready to give up. I was convinced that the draw was completely empty of mule deer.

No more than 10 seconds after I put my binoculars down, I caught movement in the bottom of the ravine drainage. I pulled up my binoculars only to find a nice buck making his way up the draw. He came to about 50 yards or so before finding a shady place to bed and spend the afternoon. The scenario was perfect. I would have a chance to redeem myself before the long ride home. The wind was right and the terrain was forgiving. It was about 12:30 when I began my stalk.

I made my way into the drainage bottom the buck had traveled. He was bedded in a small finger of the ravine that protruded uphill from the drainage bottom. I got within 60 yards of the bedded buck, took off my boots, and began to belly crawl to the top of the drainage that the buck was in. I successfully snuck within my comfort zone of 40 yards, propped myself up, began the waiting game.

After 30 minutes or so without any sign of the deer, I decided to push my luck and creep even closer. Before I knew it, I was within 20 yards of the ravine where I last saw the buck before it disappeared for the day. I settled in to the perfect location. I had a few small sagebrushes surrounding me to break up my silhouette, the wind in my face, and the sun at my back. I was willing to wait it out as long as it would take.

One hour passed, then two. Before I knew it, over four hours had gone bye. As the sun got lower and lower in the sky, I began to worry that the buck was going to remain bedded until dusk and I would have to ambush it to make something happen. At that moment, I looked into the ravine one last time and all I saw was a beautiful set of antlers. Finally. He was now at 18 yards. All I needed was for him to look away and give me an opportunity to draw my bow. When he turned his head opposite my direction, I drew my bow and sent the arrow flying. The last thing I remember was seeing my arrow bury itself right behind the shoulder. My patience had paid off, I watched him tip over no more than 100 yards away. I jumped for joy, hooped, hollered, and fist-pumped until I found myself looking over my best mule deer to date.