Overall activity status: “The brush is all torn up, necks are swollen and the bucks are ready to go,” says... 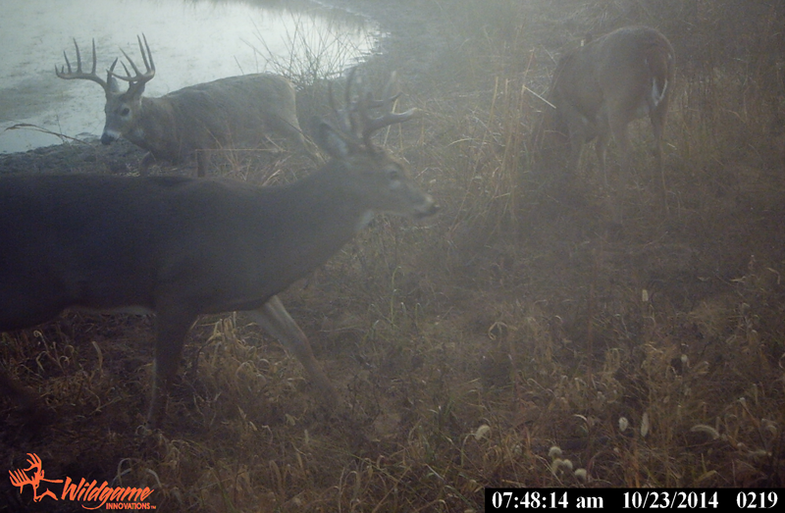 Overall activity status: “The brush is all torn up, necks are swollen and the bucks are ready to go,” says Martin Kelsay, owner of Hunters Headquarters in Auburn, Nebraska. “We’re in full-on pre-rut.”

Like many hunters across the Great Plains, Kelsay has seen an increase in both daytime activity and buck sign in the last week, with occasional lulls brought on by the uncomfortably warm weather. Kelsay (like many of my contacts) says he’ll be hunting hard in the next week as the action starts to build toward a crescendo.

Fighting: Sparring is getting more serious. Ben Doty of Cedar Breaks Ranch in central South Dakota watched a 2-year-old buck and a 3-year-old with a split brow tine duking it out on a winter wheat field earlier this week. “They were going at it pretty hard, with the 2-year-old getting in some pretty good hits, until that double brow caught him in the head and sent him running. I was surprised to see such serious action.”

Rub making: Rubs are everywhere now, many popping up in just the last week or so. A good number of rubs Kelsay is seeing are surrounding scrapes.

Scrape making: Like rubs, scrapes have gotten much more numerous in the past week, as blog commenters American Native, tmdavis 7 and ahammes13 noted in response to Wednesday’s report. Doty says scrapes in his central South Dakota area are increasing in size and number and most buck visits are still at night, but Clete Frazell in Kansas witnessed scraping and rubbing from his stand a few days ago.

Chasing: Frazell was hunting a woodlot on an evening sit when three does came in, chased by a pair or 1 ½-year old bucks. After the does eluded the youngsters, he watched as the bucks rubbed saplings and made scrapes. Fellow Kansan Nathan Oehlert has witnessed only a small amount of chasing firsthand, but he’s hearing from other hunters that chasing has really turned on in the last couple of days. In Nebraska, Kelsay observed a pair of 140-class bucks dogging does across open fields this week. Jerick Henley at Chain Ranch Outfitters in central Kansas hasn’t seen any mature bucks chasing yet, but earlier this week he watched four small bucks spar and check does on a food plot. “The bucks checked out every doe on the plot,” Henley says, “and then went back to pushing each other around.”

Daytime movement: Henley reports (and his trail camera photo, above, confirms) that daytime activity is increasing slightly in southern Kansas, although the hot, dry weather hasn’t helped. Doty has also seen a general increase, but he believes the big push is still a week away in South Dakota. One factor that suggests the rut is nearing: “Does are starting to chase off their nubbin bucks,” Doty says, “so nothing bad happens to them.” Interestingly, Oehlert, who provided some fascinating video from one of his scrapes in the last rut report, says many bucks that previously showed on his camera in Kansas haven’t been back lately. “That tells me they are elsewhere looking for does and less worried about food plots,” he says. Clete Frazell has heard reports of a pair of big Kansas bucks hit by cars—another sign (albeit an unfortunate one) that deer are traveling. His brother, Curt Frazell, expected to see a lot of deer movement on a Tuesday night hunt with cooler temperatures and no wind, but he saw no action and his cameras are turning up mostly nighttime movement. “I’m not sure what is going on,” Frazell says. “All I can think of is it’s the calm before the storm.”

X factor: The cool-down from last weekend’s record highs has a lot of hunters I talked to very excited about the next few days in the woods. The buildup of daytime activity and deer sign that’s happening right now makes this a great time to be in a tree stand or ground blind no matter what the thermometer says, but a forecast that calls for cooler temperatures throughout the weekend can’t hurt. As Jerick Henley puts it, “The good news is that no matter what the weather does, the rut will happen. Cooler temps are coming and the bucks are starting to get interested.” Don’t miss out on the fun.