Overall activity status: It’s that time of year when anything can happen, as Dusty Gordon found out when he downed... 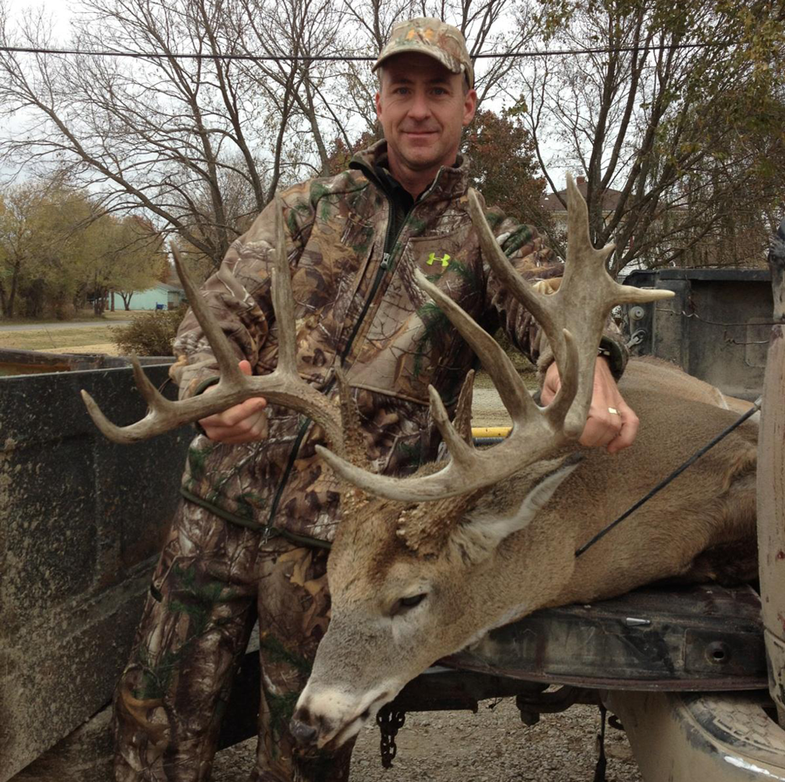 Overall activity status: It’s that time of year when anything can happen, as Dusty Gordon found out when he downed this 180-class buck near Grenola, Kansas, November 14. The buck showed up out of the blue on heavily scouted land just days before, and stuck around long enough for Gordon to score at 3:45 p.m. the last day of his weeklong hunt. Gordon, of Acworth, Georgia, and the landowner kept moving trail cameras to discover where the buck was coming from, but despite having nearly the entire tract covered, they couldn’t pin it down. They decided to hunt elsewhere on consecutive evening and morning hunts, and while they were gone the buck showed up both times during daylight hours to check does. That afternoon Gordon moved in for the kill. It’s a classic example of using up-to-the-minute scouting intel to determine what a highly unpredictable rutting buck is up to.

Rub making: Bucks are still roughing up trees, as I found last weekend when we got a dusting of snow in northeast Kansas. On my way out of the woods after a morning hunt, I discovered a rub that was obviously fresh, as the snow around the base of the tree had been churned into freshly pawed dirt. Gordon’s 150 began tearing up a sapling after Gordon grunted it in, and other hunters have reported aggravated bucks thrashing trees as a way to blow off steam and display dominance.

Scrape making: Most scrapes in my hunting areas are free of leaves and apparently still in action. I’ve observed droppings in a few, and other hunters report bucks and does are still paying lots of attention to scrapes. But Ben Doty of Cedar Breaks Ranch in central South Dakota says bucks in his area have abandoned scrapes in favor of chasing does.

Chasing: Early action that was dominated by young bucks harassing does almost unrelentingly has settled down as the bigger mature bucks have stepped in, forcing smaller bucks to the sidelines. “It’s snot-flying, steamrolling chasing,” says Doty. “The bucks don’t care. You can stand up and wave at them as long as you don’t spook that doe.” The frenetic activity can hurt as well as help, Doty notes: “We grunt-called a buck out of a thicket and he was on a direct line to the hunter when a hot doe cut across his path and took him into the woods and right out of that hunter’s dreams.”

Fighting: Reports of fighting are spotty, but several hunters (like Doty) report success with bucks responding to grunt calls. Gordon reported grunting in a 150-inch buck, which he passed, but he had no success rattling, despite normally rattling up 10 to 12 bucks during the course of a weeklong Kansas hunt. In South Dakota, Doty says battles have turned serious. “They’re not just tickling antlers anymore; they’re pushing each other around until one of them quits—and usually there’s a doe nearby.”

Daytime movement: Daytime movement has been good for most, particularly from dawn to noon and from 2:00 to dusk. South Region Rut Reporter Eric Bruce, for example, shot this 130-class buck at dusk on Kansas public land November 14. Meanwhile, Doty says the action in central South Dakota is happening at all hours: “Even if it’s too cold in the morning or you drank too much beer the night before, you’d better go ahead and get in the stand. It can happen anytime.” Others, such as Mike Bosma, are experiencing tougher luck. Hunting in southeastern South Dakota, which was hit hard by EHD the past couple of years, Bosma reports seeing not a single deer during a recent two-day hunt. Numbers are also down in parts of Nebraska and in North Dakota, where the DNR recently announced plans to recommend a limit of one deer license per hunter starting in 2015.

Estrous signs: On his hunt, Gordon observed several does urinating “near, but not in” scrapes, and watched bucks home in on these spots, curling their lips and trailing off in search of the source. Hunters are also observing lots of young does and button bucks wandering alone. Doty is seeing many chases that involve multiple bucks after a single hot doe.

X Factor: Several hunters reported seeing more and more single does in open fields with mature bucks standing over them. This tending behavior often takes the biggest bucks out of the action for 24 to 48 hours, but once the doe is bred the buck will again be searching. The roaming may not be as pronounced as during the cruising phase, when it seems like every buck in the woods is on the move. But once the breakup begins, monitoring funnels and travel routes can pay off with a nice buck at almost any time of day. Doty is focusing on travel routes to feeding fields, because Dakota does are feeding hard in response to bitter temps, and dragging bucks behind them. Wherever you sit, there may be no better strategy now than sustained time in the woods. “Every day I’m seeing new deer I didn’t even know were on us,” Doty says. “Bucks we don’t even get on camera now are coming out in daylight, and if you see them you’ve got a great chance to kill them.” Anything can happen.