Some Are Bucks Starting To Move

Overall Activity Status: Things are finally starting to feel like fall across the Great Plains, though moisture is still missing... 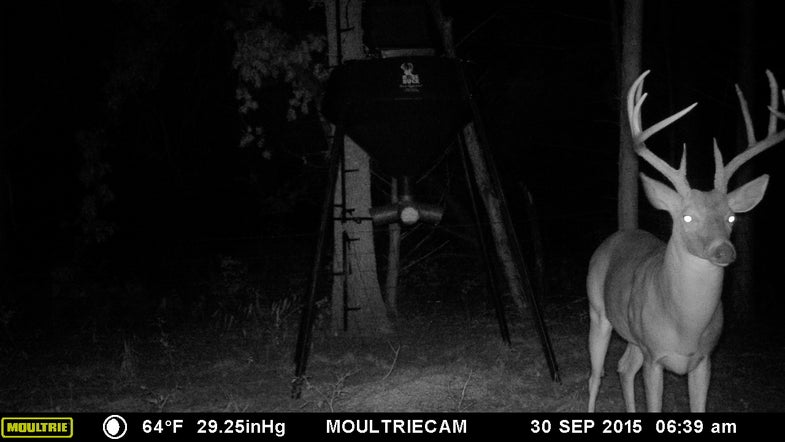 Overall Activity Status: Things are finally starting to feel like fall across the Great Plains, though moisture is still missing from most of the area’s forecasts. The cooling, though stable, weather has kept deer activity consistent, with most hunters reporting a steady bed-to-feed pattern. On the southern Plains, Dan McVay reports some success hunting whitetails by focusing efforts exclusively on food. His BuckVentures partner Brandon Adams reports that buck travel is on the increase and sent in this photo and report as evidence:

“I’ve seen an increase in buck travel,” Adams says. “Bucks that were once in bachelor groups are now dispersing—mature bucks first. I’ve captured this four-and-a-half-year-old buck [photo above] almost two miles from his summer range. He’s posted up shop at this Boss Buck Feeder location and has remained here for a week now. Every time I check cameras I capture a new buck or a buck from a different part of the ranch.”

Sparring: From Dan McVay: “Bucks are breaking up and starting to spar on cam pics. One big buck busted up really good already as they are starting to establish pecking order.”

Rubs: Reports from eastern Nebraska show some rubs appearing there.

Scrapes: Hips Archery Target pro staffer Casey Danielson has reported a bit of rut-related activity showing up in Nebraska’s Pine Ridge. “I’m starting to see some scrapes appear and it looks like they have been working them pretty good,” said Danielson.