Some Bucks Transitioning to Fall Patterns 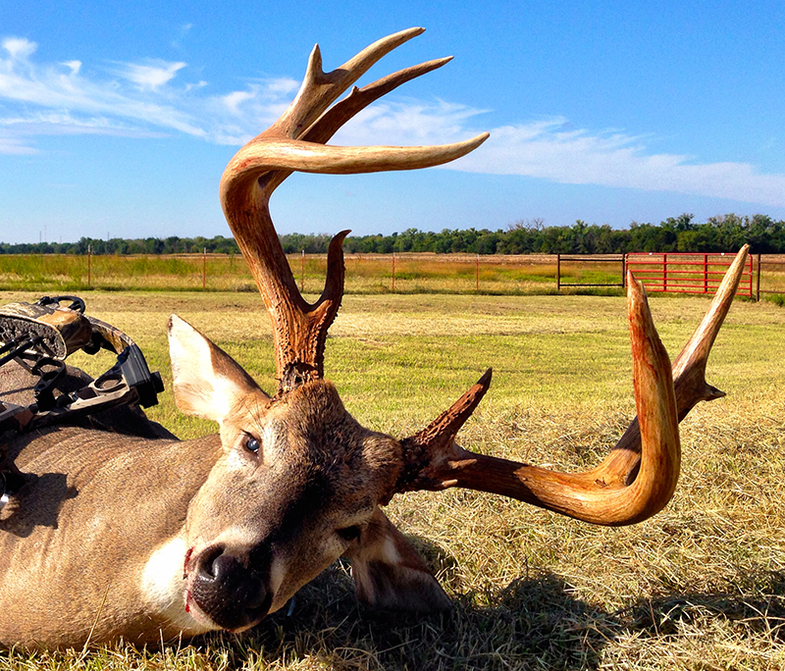 Overall activity status: Transition time means big variations in buck behavior now, with some whitetails sticking to summer routines and others shifting to more fall-like patterns. For Jerick Henley of Chain Ranch Outfitters, who tagged the 156-inch mainframe 7-pointer in this photo around sunrise on opening day in central Kansas, change was good news. “I hadn’t seen this buck until Sept. 11,” Henley says, “and he showed up again on Sept. 13. He got shot because of his age and his mass.” Henley estimates the buck was at least 5 years old and fully mature. With 6-inch plus bases and 21 inches of mass on each side, the rack carries good mass all the way out. “Most important,” Henley adds, “he was extremely healthy. The amount of fat on this buck was unreal, and he didn’t live near much agriculture, so all that weight came from native forage.” You can see the benefit of good nutrition up top, too: 156 is an impressive score for a 7-pointer.

On the other hand, the changes in behavior that predominate this time of year can be frustrating for hunters trying to pattern a buck. Spencer Neuharth reports that South Dakota buck activity has been hard to gauge as deer start to shake their summer patterns. But with the state’s Sept. 27 archery opener still a week away, South Dakotans still have time to pin down a shooter.

Fighting: None to report.

Rub making: Clete Frazell in southeastern Kansas reports the first rubs of the season: Setting a stand Saturday he spied two new rubs on 5-inch diameter trees 30 yards inside timber bordering a cropfield. Since early rubs on stout trees are indicators of mature bucks marking territory, identifying such rubs can direct your hunting now, though these early season markers likely won’t mean much once breeding starts.

Scrape making: Nothing yet.

Daytime movement: Cooler temperatures over the weekend had bucks moving in Kansas, Henley reports, but warmer, dryer weather just in time for the Sept. 15 opener drastically reduced daytime sightings. Frazell reports that bucks in his area are still in bachelor groups, and a big-racked pair that recently tripped my trailcam late one night suggests the same. South Dakota bucks are bedding close to food sources, which cuts down their need to travel, Neuharth observes, and cooler temperatures are occurring mostly at night, giving bucks even more reason to stay put until after dark.

X Factor: The corn harvest in southeastern Kansas is basically finished, Frazell says, which obviously reduces cover and contributes to a shift in buck routines. On the northern end of Great Plains, soybean leaves are starting to yellow, Neuharth reports, causing deer to relocate from fields they were hitting hard just a few days ago. “This makes scouting more difficult,” he says, “and renders some stands useless until we get some colder weather.”