Overall activity status: The secondary rut is in progress now, at least in areas where does are still left to... 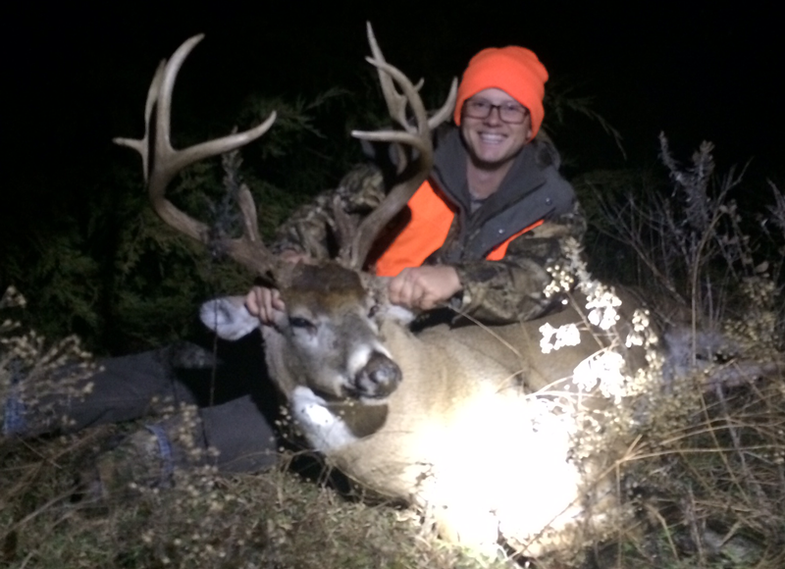 Overall activity status: The secondary rut is in progress now, at least in areas where does are still left to be bred. Reports from southeast Kansas to South Dakota show that mature bucks are being seen—and successfully hunted—during daylight hours.

Brady King, above, took this 171-inch buck at Lil’ Toledo Lodge in southeast Kansas on December 6. “It’s a buck we’ve been hunting all year,” guide Kim Sherman says. “He’s one of those nocturnal bucks and we only had two daylight photos of him.”

Sherman had a bowhunter targeting the buck for five days during the archery season without a sighting. On December 4 it showed up on camera during daylight near an unoccupied box blind. King hunted the blind all day the 5th and again on the 6th, when the buck came in near 5 p.m. hot on the trail of a doe.

Daytime movement: Marc Casavan, at Mark’s Old School Barber Shop in Spearfish, South Dakota, says West River bucks are moving widely in daylight hours. “A lot of does are already bred, so bucks are roaming hard, out in the open, and getting in trouble, broken horns and all.” Casavan believes the heaviest secondary rut action is still to come, but nice weather—mild temperatures and calm winds—is contributing to bucks’ willingness to travel in the open.

At Lil’ Toledo, Sherman says two new bucks have popped up in the last few days, one a 14-point Booner that a hunter shot at but missed during an early morning sit December 11. “These are bucks we haven’t seen all year,” Sherman says. “It’s the doe activity that’s bringing them in.” He’s still seeing strong morning movement until 11:00, with even stronger early afternoon activity in areas that are hot.

Action has been spottier in Nebraska, according to Martin Kelsay of Hunters Headquarters in Auburn. “I think our deer have all packed their bags and gone to the Bahamas,” Kelsay quips. “Nothing is moving. Biologists I’ve talked to say they’re hearing the same from everybody.” Almost everybody: A pair of muzzleloader hunters who stopped by his shop earlier this week reported bucks chasing does 50 miles north of Auburn. “I think we’re still holding out for the second rut in my area,” Kelsay says, “still waiting for it to start.”

Fighting: “There’s a tremendous amount of fighting right now,” Sherman says. “Our hunters are hearing it in the blinds, and we’re picking it up on trail cameras, too.” In South Dakota, Casavan captured “an unbelievable fight scene” between a 155-inch and a 140-inch buck, which he’ll feature on his hunting show, “RollnBones TV” in 2015. “The bigger deer put the 140 on his back twice,” Casavan reports. “We’ve also seen a lot of broken-horned deer lately; doe numbers are down so there’s lot of competition.”

Scrape making: Bucks can be expected to visit established scrapes more often and make new ones as breeding ramps up again. Sherman says a trail he walked today was covered in fresh scrapes.

Rub making: Bucks will continue making rubs as long as they are in hard horn, but fresh scrapes are probably a better indicator of big buck activity now.

Chasing: It’s spotty but it’s happening. Sherman saw a mature buck chasing a hard-running doe as recently as Wednesday. Detect a chase now and there’s a pretty good chance that a mature buck is involved. “I see a lot of the younger bucks just trailing does,” Sherman says, “but it’s the big bucks that are doing the hard chasing.”

Estrous signs: Sherman notes that one often-overlooked estrous sign can be picked up on trail cam as well as in the field: dark tarsal glands. “A doe in estrus will pee on her tarsals, which turns them dark,” Sherman says. “Find a doe with dark tarsal glands that’s doing a lot of tail-flicking and that’s a pretty good sign she’s hot. I’m still seeing a lot of does with snow-white glands, which means they’re not ready yet.”

X-factor: It’s all about the hot doe now. Where does are in (or soon to be in) estrous, good hunting is still possible, but that action won’t likely be as widespread or as concentrated in time as during the primary phase of the rut. Patience—and little bit of luck—are more important than ever to tagging a big buck.

If you end up eating that tag, take solace in in this: Next year could be even better. “It’s been a great season for quality in South Dakota,” Casavan says, noting that the 60 inches of snow his region received in October kept many hunters out of the field. “It killed some deer, no doubt, but it also gave some of those bigger deer another year to grow.”

In Nebraska and eastern South Dakota, both hard hit by EHD in recent years, good fawn crops mean deer populations continue to recover. “All in all it’s been a little better than last year, but far from up to par,” Kelsay says. “It takes time to rebuild, but we’re headed in the right direction.”

And in Kansas, where Sherman says it has been a tremendous year for quality bucks, a good crop of 3 ½ year old deer has him looking forward to 2015. “The 3-1/2 year old deer showed good antler growth this year, and the wet spring had a lot to do with that,” he says, noting the connection between good browse and good antlers. “With timely rains and the tremendous group of younger bucks we have, the forecast could be outstanding again next year.”