Velvet Racks Are All But Gone

Over the weekend, I received a picture of this great Kansas buck from Jerick Henley of the Chain Ranch. After... 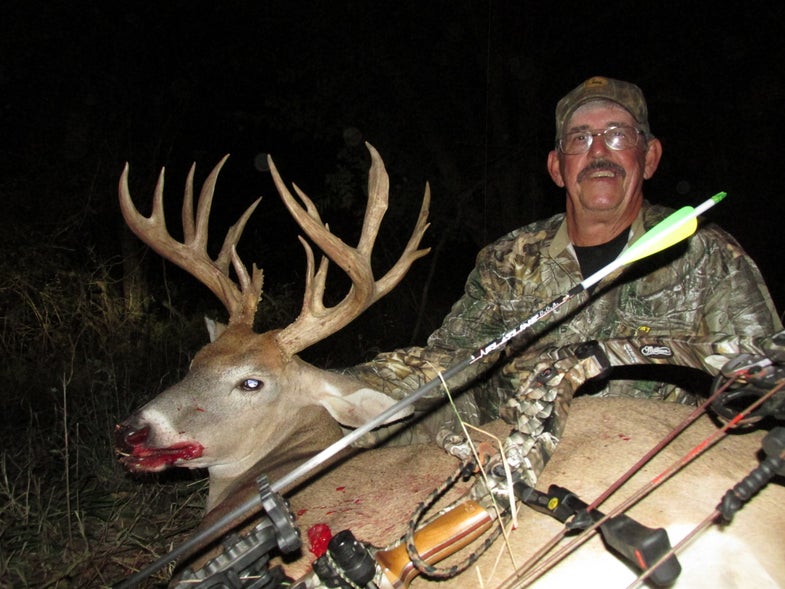 Over the weekend, I received a picture of this great Kansas buck from Jerick Henley of the Chain Ranch. After a tough elk hunt where his buddy scored on a great public-land bull, Henley was right back to work, hunting big whitetails in southern Kansas. Here’s the report:

I Spent Tuesday and Wednesday in the stand in Kansas. Bucks were still hanging together for the most part and on a feed pattern, moving early and late from alfalfa and other food sources. Wednesday evening Roger Kildow stuck this bruiser. Less than 20-yard shot with less than a 50-yard recovery.

This beautiful, mature buck has 16 points and should gross in the high 160s to low 170s. Henley and the crew at the Chain Ranch had been watching this buck for the past few weeks and just last week captured him twice on trail cam. You can see he was scraping his velvet pretty hard on September 7, and nine days later was completely hard-horned when he was killed.

Henley also added that he saw a few rubs last week and spotted a pair of 3-year-old eight points tickling their horns together, a sure sign that bucks are starting to test their competition before the pre-rut really heats up.