It’s common for hunters to get frustrated right now, but I enjoy this phase of the season, even though I... 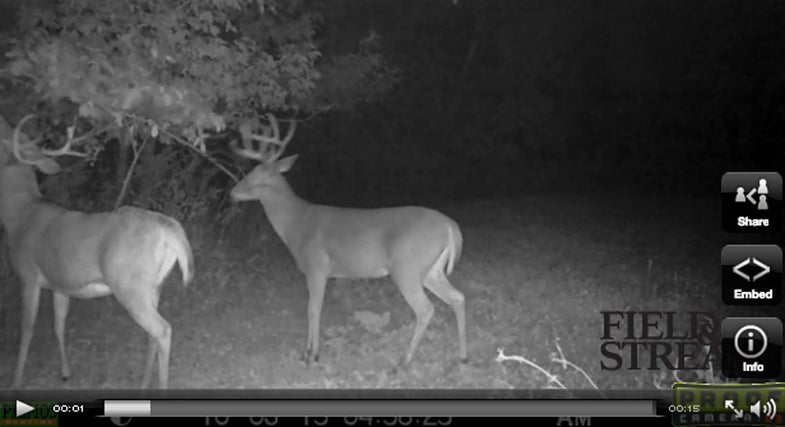 It’s common for hunters to get frustrated right now, but I enjoy this phase of the season, even though I haven’t been in a tree stand much. I’ve got plenty of cameras scouting while I work, and what they’re showing me has me excited for the weeks ahead.

Take, for example, the pair of videos posted here. The pair of bucks in the first clip are enjoying a twin work-over of a mock scrape I made about 10 days ago. Their tolerance of each other shows that not all bachelor groups have broken up. In fact, I have several videos of this pair, and they look so amazingly similar that I wonder if they’re brothers. They seem the same age, and the configuration of their racks is so similar they look like twins.

The second video includes a third buck, and though we get only a couple seconds to see him, he clearly introduces a different dynamic. Though not overtly aggressive, the beefy 8-point walks in and shakes things up a bit. One of the “twins” jumps aside and gives the third buck some space; I feel like Buck #3 has thrown his weight around with at least one of these guys before, and, at least in this brief glimpse, the other buck is not in the mood to challenge him.

Videos like this are a great tool for a couple of reasons. First, they give a glimpse into the number of bucks in an area. My camera captured eight different bucks on this mock scrape in one week, and though these three bucks are certainly fine animals, there’s a ten-point that’s even better. Second, watching the interaction of these three provides a hint into their personalities, which might influence hunting strategies. For instance, the bully 8-point and the twin with the broken beam seem to have aggressive personalities; this suggests that they’d be vulnerable to calling and rattling. Conversely, the buck that shied away from the bully might need to be dealt with more carefully. I’d start with doe bleats and soft grunts if I encountered this guy.

So sure, things are going to be a whole lot more exciting (at least in terms of buck activity) 10 days from now. But scouting runs and camera work are a critical step in preparing for the best rutting activity. It’s 80 degrees here in Minnesota as I write this, but I’m darned excited about deer hunting.