Nearly every deer hunter I’ve talked to this fall has referenced the extremely wet spring we had on the Great... 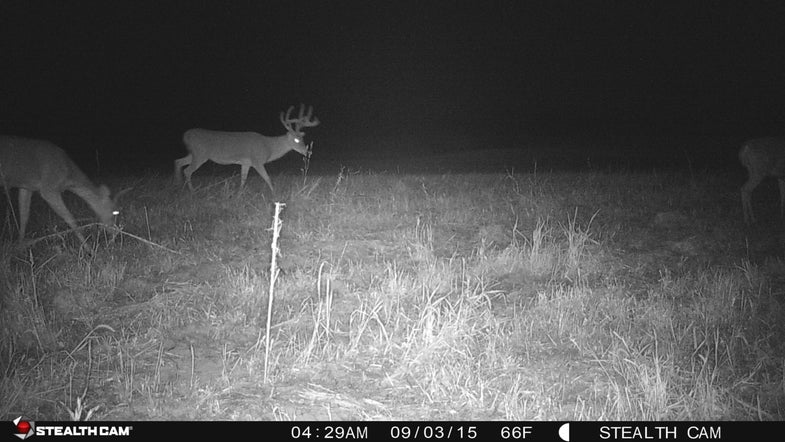 Nearly every deer hunter I’ve talked to this fall has referenced the extremely wet spring we had on the Great Plains, and how the bucks have benefited from all that moisture. The entire Plains region has climbed out a multi-year drought. Even the southern Plains states, which haven’t seen measurable rain in years, are knee deep in green grass going into the fall.

Jeff Danker, of Buckventures Outdoor TV, checked in from Hyannis, Neb., where he and his team have been chasing the big open-country whitetails and trophy mule deer that haunt the Sandhills.

“We have seen some sparring already,” Danker said. “Two small whitetails got after it pretty good the other night. We have seen a ton of big whitetails as well, including two over 170. I would say that three-quarters of them still have velvet, but some are completely hard horned. Of course, the ones that fought were hard horned. For the most part whitetails are leaving in the sloughs and feeding on the lush bottom fields we are hunting. Right now the mornings are the best movement. We actually are seeing some of the really big deer on their feet in the bottoms an hour after first light. Bucks look extremely healthy and antler growth looks phenomenal probably due to the wet summer they have had.”

Also got a short note from Bryan Rommel, down in eastern Kansas, where a dove hunt turned scouting mission:

“Hunted my dove patch last night and noticed a few deer tracks in it. Set a camera up and ran it last night. Had several deer in it, and one was rubbed while all others still in velvet.”

All in all, things are shaping up to be a great year on the Great Plains. Let’s just hope the recent dry spell we’ve been going through eases up and some timely rains keep deer healthy.