It’s natural to feel a letdown as the rut winds down. But the truth is, this is a period when... 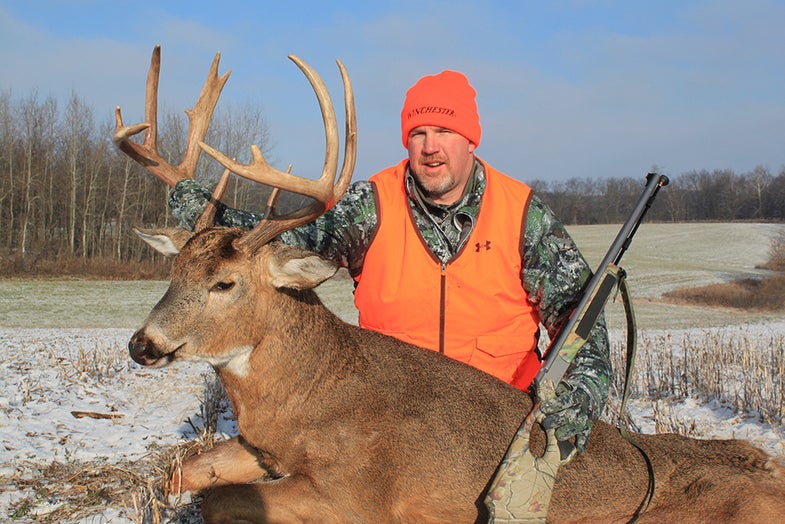 It’s natural to feel a letdown as the rut winds down. But the truth is, this is a period when buck are highly vulnerable. My neighbor and hunting buddy Alan Mote proved just that yesterday when he shot a buck we knew very well, but had not been able to tag.

The buck earned his name, “Hurteau III,” for his resemblance to two other “Hurteau” bucks that had lived in our hunting area during the last few seasons. Like those before him, Hurteau III was easy to identify, thanks to stickers that sprouted from his tines. For much of the fall, he had a pretty tight core area that included a small clear-cut and a 6-acre switchgrass field near plenty of food. My trail cams consistently captured him in the same area, and almost nowhere else.

Still, we never laid eyes on him during the early archery season, and Alan had only one fleeting encounter with him during the rut. When Minnesota’s late-muzzleloader season opened Saturday, it was pretty obvious that bucks were no longer as interested in chasing does as they were in filling their bellies. I watched four bucks come to a food plot that evening, and a few days later Alan had an encounter with a giant 10-point. That 160-inch buck was nose-down, feeding in a cut corn field at 3 pm on Monday, a full two hours before dark. Alan was running late getting to his stand, and when he arrived the buck was already there. Worse, he presented no shot.

Undaunted, Alan set up the next evening on a food source right in Hurteau III’s wheelhouse. He’d been in the stand less than an hour when he spotted a buck heading toward the grub. Alan sized up the deer and made a 50-yard shot. “I wasn’t sure at first, but then he turned his head and I saw a forked G2 that I knew Hurteau III had. He piled up within 40 yards.”

So, if you’re feeling a post-rut letdown that’s understandable. But don’t let it keep you out of the woods.