Overall activity status: Daytime deer movement is still a hit-or-miss affair in much of the region. However, things are on... 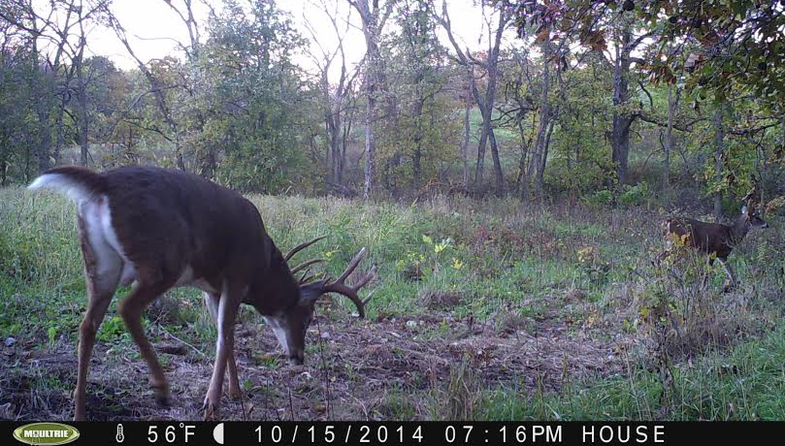 Overall activity status: Daytime deer movement is still a hit-or-miss affair in much of the region. However, things are on the upswing, with a strong chance of near-ballistic activity in the next week. Ted Marum, owner of Tri-State Outfitting, provided the trail cam photo of the Missouri monster above, and they serve as proof that mature bucks are now starting to move well during daylight hours. Marum had two clients who enjoyed up-close encounters with monster bucks this week. Neither was able to seal the deal, but their experiences prove we’re on the cusp of some fantastic pre-rut action.

Fighting: Still no knock-down-drag-out bouts being reported, but Iowa hunter Dennis Williams reported seeing bucks with broken tines last weekend. While bucks can snap tines while rubbing, fighting/sparring is a certain cause. I continue to get trail cam photos of sparring bucks on my cameras in Minnesota.

Rub making: Fresh rubs are popping up all over. I’ve seen them especially in staging areas near food sources, and increasingly in travel corridors and funnels. While many big rubs are created by mature bucks, younger bucks are getting in the swing of things and working these rubs too.

Scrape making: Some of the best whitetail hunters I know in the region call this period “scrape week” (though it’s actually longer than seven days). Spot-checking field edges, food plots and other active food sources will reveal multiple scrapes. However, recent rains have knocked down a bunch of leaves, so only the freshest scrapes will show bare dirt.

Daytime movement: Generally good where it’s happening, but the best is yet to come. While this has been a nice, cool fall—which has resulted in solid daytime movement—there’s a sharp cold snap in the forecast for the weekend and into next week. If the weather folks are right, things could really bust loose in the next seven days.

Estrous signs: Still no reports of a hot doe yet, but the urgent behavior of bucks suggests that some are getting close.

X-Factor: Weather, weather, and weather. All signs point to a stellar forecast of pre-rut activity across the region in the days ahead. But if a significant weather event (rain storm, heat wave, etc.) should hit, the wheels could come off the bus immediately. There’s nothing like that in the forecast, but I have known weather models to fail now and again….