Bucks Are Revving Their Rut Engines

Overall activity status: Scattered rain showers fell early this week, putting deer on their feet in the afternoons. My neighbor... 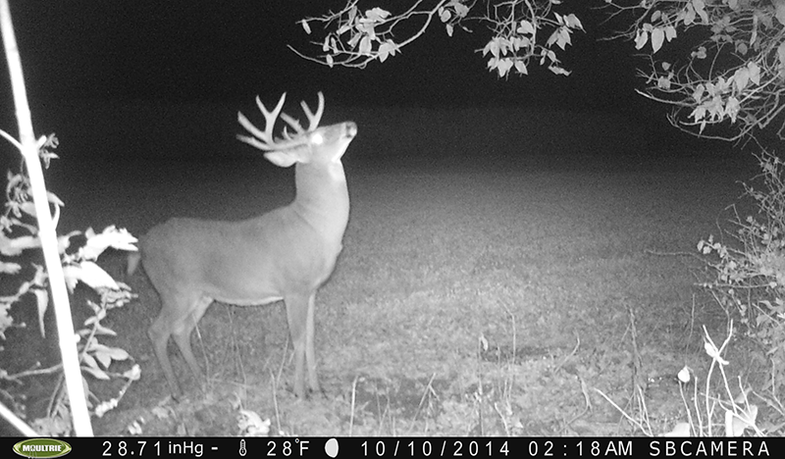 Overall activity status: Scattered rain showers fell early this week, putting deer on their feet in the afternoons. My neighbor had a 150-class 8-pointer walk into bow range, but the buck never presented a shot. I ditched hunting that afternoon and regretted it: Driving by an unpicked beanfield near one of my stands, I watched a stud feed with a group of does. With more cool weather in the forecast, hunters should have a good week ahead.

Fighting: My cameras are capturing some sparring between younger bucks. No reports about serious fights, however.

Rub making: This is definitely on the rise, but mainly near food sources. I grouse hunted in northern Wisconsin’s big woods over the weekend and walked a lot of miles through transition areas and funnels, and saw very few rubs. Back at home in farm country, some speed scouting revealed much of the same—a few new rubs on the edges, not many back in the woods.

Scrape making: New scrapes are popping up all over, especially on the edges of fields, plots, and other food sources. The really good ones are being worked repeatedly. These are excellent places to set a trail cam and get an idea of the number and quality of bucks in the area.

Chasing: Nothing serious to report. Young bucks are still nudging does at food sources; the big boys are saving their energy for the real deal.

Daytime movement: Generally good to excellent across the region, thanks to the cool weather mentioned above. As always, pinpointing hot food sources increases the odds of seeing deer during daylight.

X-Factor: Buck density and age structure. Next week should kick-start some of the pre-rut action that makes this time of year so enjoyable. How much of that action hunters witness will largely depend on the number and age of bucks in the area. The buck in the photo above is just one of several mature animals on a farm that I hunt. I’ve captured him on two trail cams set a half-mile apart. Because he has other good bucks that compete with him for does, he’s going to be busier and busier patrolling his home range. With more cool weather, I am hoping to see this guy again—hopefully during daylight, from a treestand.