Estrous Does and Wintry Lows Keep Many Bucks Moving

Overall activity status: It’s been a cool fall across the region; one in which we have rarely said “If only... 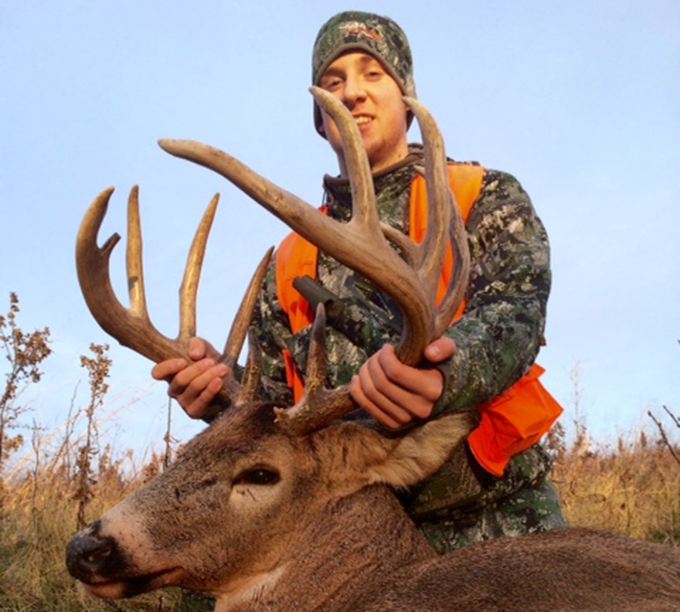 Overall activity status: It’s been a cool fall across the region; one in which we have rarely said “If only the temp would drop.” In four days of bowhunting with Deputy Editor Dave Hurteau in Minnesota this week, we rarely saw daytime highs reach double digits. This massive cold front, coupled with snowfall that blanketed many areas, has done much to put deer on their feet.

A perfect case in point is Charlie Krambeer, who bagged the massive buck shown here on his family farm near Rushford, Minnesota. Charlie has an enviable deer hunting record for a high school senior, but this buck is certainly his best. “My dad [Brian Krambeer] checked trail cams just before the gun opener, and we had this big buck we didn’t recognize,” Charlie says. “When the opener came, I sat a stand near the camera, situated near a food plot planted to Whitetail Institute clover. The stand was high on a ridge, and dad thought I was crazy to sit there because it was windy and cold that day. But last Christmas my parents gave me a Sitka Fanatic jacket and bibs and I knew I could take the weather if it meant a crack at a nice buck. Five minutes after I settled in, I looked up and saw this buck approaching the stand. I knew he was a good buck when I took the five-yard shot, but I didn’t appreciate how big until I put my hands on him.” The 13-pointer scored 174 6/8 inches and sported a big kicker point on his right side.

Fighting: Usually by this time of year I’ve received at least one report of a serious buck fight, but so far I’ve heard none. Still, the amount of broken tines and main beams on the bucks I’m seeing serves as proof that bucks are clearly bashing antlers.

Rub making: Very few fresh rubs now, as bucks turn their attention to finding and pursuing does. I expect fresh rubs to start appearing as breeding subsides and bucks return to the seeking behavior of the late pre-rut.

Scrape making: My trail cams, many situated on real or mock scrapes, show that buck visits to these signposts is dropping off rapidly. One of my favorite scrape-cam sites showed strong buck activity through last week, then a dramatic cold down on cameras near scrapes. Like rubs I’m betting bucks will revisit scrapes in the next week or so.

Chasing: Hurteau and I have both seen mature bucks pursuing does during out recent hunt. While the breeding peak is slightly behind us, bucks aren’t quitting their doe pursuit any time soon.

Estrous signs: I’ve seen many lone fawns that have been kicked off by their mothers this week–proof that bucks are singling out estrous does and serious breeding is happening. Danny Clipp, head guide at BBT Outfitters near French Lick, Indiana, called to report that deer were in lockdown and not moving well. Ted Marum, owner of Tri-State Outfitting, reported that he’d watched a 165-inch 10-point standing on top of a round bale of hay in an Iowa cornfield the other day. Interesting tending behavior for a monster buck, but Marum notes that the bale provided an excellent vantage point for the buck to keep track of a does that was obviously in estrus.

X-factor: Temperature. Though hunters will relish the forecasted weather report (which calls for temps close to 40 for the weekend), the warm-up has the potential to put the skids to overall deer movement. If temps skyrocket, expect whitetails to get lazy as their caloric needs diminish.