You never know when a big old deer is going to move. So sometimes, the only way to tag a... 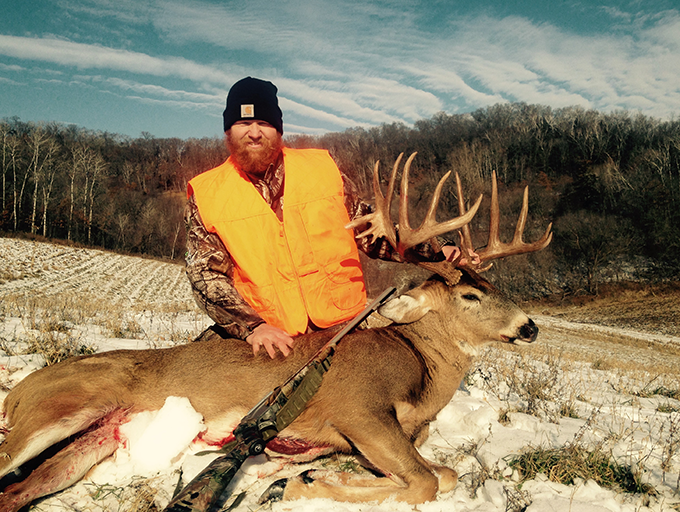 You never know when a big old deer is going to move. So sometimes, the only way to tag a giant deer is just to keep taking swings at him, refusing to give up until the buck makes a mistake or the season closes. That fact has stood out for me many times during the 2014 deer season.

For example, just last week I visited central Illinois for a shotgun hunt. There, Whitetail Properties marketing VP Paul Sawyer shot a giant, 180-class whitetail as it worked a scrape line in full daylight. Members of the club leasing that property had dozens of trail cam pics and three year’s worth of shed antlers from the buck…but the afternoon Paul shot the buck was the first time anyone had actually seen the deer.

That story leapt to mind when my friend Bob Borowiak called Sunday afternoon to inform me that a buck he’d been hunting was down. Bob had devoted virtually every evening since July 4th to scouting a 7-1/2 year old buck he’d nicknamed “Lefty.” And when archery season opened, Bob had thrown all his considerable hunting effort to the pursuit of that one deer. Bob figures he’d invested close to 1000 scouting/hunting hours in Lefty. Though impressive, the effort was not enough. “Lefty is dead,” Bob said, sounding surprisingly upbeat. “A guy hunting the same farm shot him with a muzzleloader this morning.”

That “guy” was Patrick Holmstadt, a 29-year old who, until Sunday morning, had never tagged a whitetail buck. “I did some hunting during high school,” Patrick told me. “But then didn’t really have a place to go. Then a couple of years ago I started dating my girlfriend, Stacy, and her family invited me to hunt their farm with them.”

That farm was the same one hunted by Bob Borowiak during Minnesota’s archery season as he pursued Lefty. Borowiak glassed and filmed Lefty dozens of times throughout the summer. But once the bow season opened, the giant buck seemed to vanish. Borowiak, an outstanding bowhunter with many fine bucks to his credit, never saw the buck after September 4th.

Patrick, however, only had to invest a couple of hours and rely on a little fate to harvest the giant whitetail. “I shot a doe on Saturday,” he says. “And the next morning the guys were going to put me in a treestand. I told them no, that’s a good spot, put someone else there. I’m young and can hike up the hill and sit on the ground somewhere.” So Patrick hiked, climbing a steep bluff before settling in behind a rock outcropping. “About 7:30, I heard a deer coming, and then I saw it was a buck. We knew about Lefty, as well as a nice 8-point and a 10-point that were on the farm. When I first saw the buck, I thought I was looking at the 8-point, and when he gave me a good shot at 50 yards I took it. The buck ran about 50 yards, started to wobble, and then went down. I reloaded the muzzleloader and got up, ready to shoot again if I had to. And then I walked up to him and knew I’d shot Lefty. I wanted to jump up and scream, but I didn’t want to screw up anyone else’s hunt. So I just kind of walked around in circles for awhile!”

Once the gang had the deer at camp, the landowner immediately called Bob Borowiak, who drove out to finally put his hands on a buck that he’d chased for months. “I was happy for Patrick,” Bob says. “It was neat that a great guy got Lefty, and on the same farm where that buck had lived most of his life.” Lefty grossed 211 inches B&C; the main-frame 12-point has multiple stickers and abnormal points. It’s definitely a buck worth waiting for, whether the wait is 1000 hours…or just a couple, on that one day when the buck decides to move.