Monster Bucks Are On The Move

We all love the frenetic nature of the chasing phase, when bucks dog does with abandon, but there’s a very... 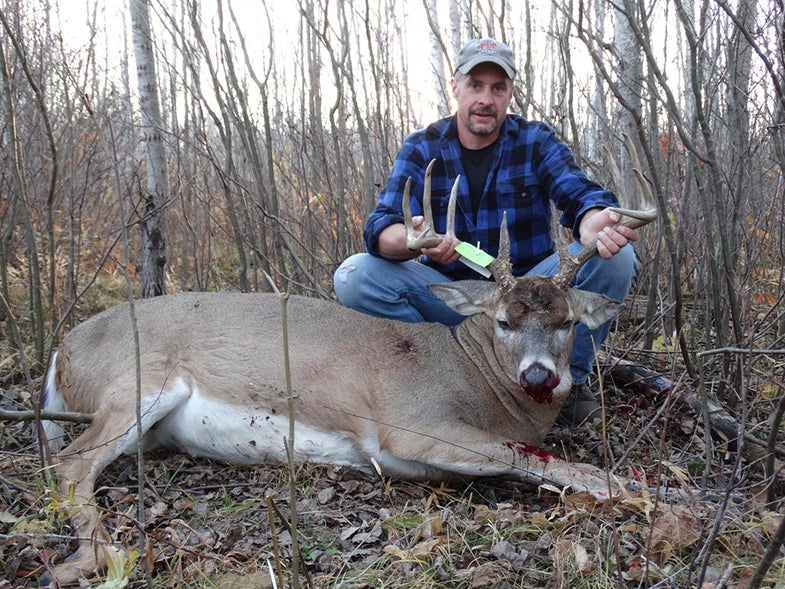 We all love the frenetic nature of the chasing phase, when bucks dog does with abandon, but there’s a very good case to be made that the first blush of the seeking phase (where we are right now) is actually a better time to tag a giant. Two of my northern-Wisconsin buddies added some weight to this side of the argument over the last three days, each arrowing a mature bruiser that was highly active, yet moving somewhat predictably within his home range.

Tom VanDoorn, an expert bowhunter and close friend, started the action last Friday afternoon. The veteran logger was on his way to work that morning when his wife Heather called. “You better get in a stand tonight,” she said. “I saw deer moving everywhere on the way to work.”
Tom, being ever-obedient to his charming bride, knocked off at 1:30, drove home, and climbed into a stand. “I was sitting by 3:30, and shortly after was surprised to hear a deer moving in the creek nearby,” he recalls. “I stood and grabbed my bow just in case it was a buck,” It was, of course, not only a buck but a monster, a deer Tom knew well.

The whitetail had eluded Tom all of the 2014 season, and had been visited a beanfield near his home off and on all this past summer. “He kind of disappeared for awhile, and I was afraid he’d relocated. But I recognized him immediately. He gave me a perfect 35-yard shot, and when I heard him crash I looked at my watch; it was 3:45. You hear about people having 15-minute hunts, but it never happened to me until now.” The 160-class whitetail field-dressed 245 pounds. 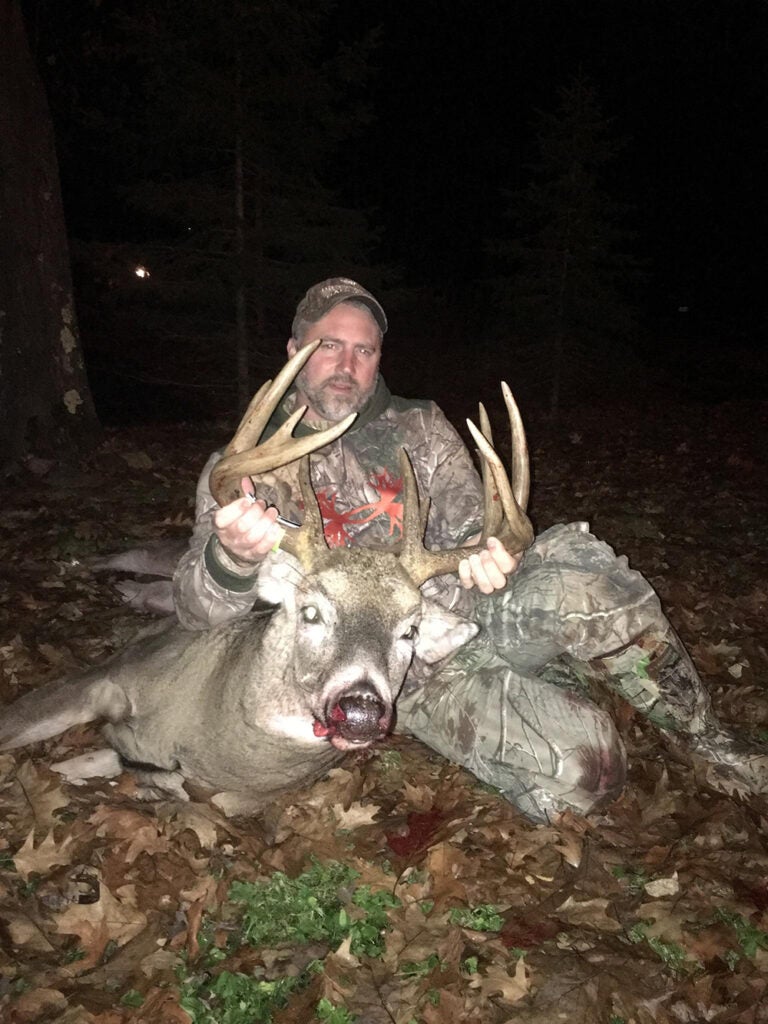 Tom’s good friend Doug Wiles followed up with a buck of his own just two nights later. Doug also knew his buck well. “I had trail-cam pics of this great 10-point last year and again this fall,” he says. “The really interesting thing about him this year was that I had a ton of daylight pics of him, including him making a rub that became a signpost rub used by multiple bucks. He bedded in a black-ash swamp, and was following a 10-year-old clearcut and alder edge to feed on an oak ridge. I figured with a good wind, I had a decent chance at him.”

Sunday afternoon Doug crawled into his tree, and well before prime time he watched a doe and fawn come from the swamp, walk within 12 yards of his stand, and head toward the oaks. “Not long after that I could hear another deer walking in the swamp, followed by a really loud twig snap,” he says. “I finally I saw the buck in a grassy clearing 100 yards out. When he cut the doe’s track, I thought, ‘Okay, here we go.’ I grabbed my bow.

“He followed the doe’s trail exactly. When his head went behind a big oak tree I came to full draw and settled the pin on his shoulder. I touched the trigger as he stepped out, and my arrow just exploded! I don’t know if the shaft had a flaw in it and collapsed, or if I hit something I never even saw. I was just sick as I watched him jump, trot away 30 yards, and just stand there. He was wondering what had happened as much as I was!”

But Doug’s hunt wasn’t over. “The buck started walking straight away, so I couldn’t shoot. Then the doe got goosey and instead of running off, she headed back toward me. The buck turned broadside at 30 yards, so I grunted, he stopped, and this time I hit him perfectly. He jogged uphill 80 yards, stood for a few seconds, and then tipped over.” Doug’s buck grossed 162 inches, with great mass.

So, two monster bucks, on their feet well before dark, right in their core areas. What’s not to love about the first steps in the seeking phase? (Cerntainly nothing for these two Wisconsin bowhunters.)