National Report: Time to Buckle Down and Solve the Puzzle

The excitement of the opening weekend has passed in many areas, and a good bunch of hunters put some great... 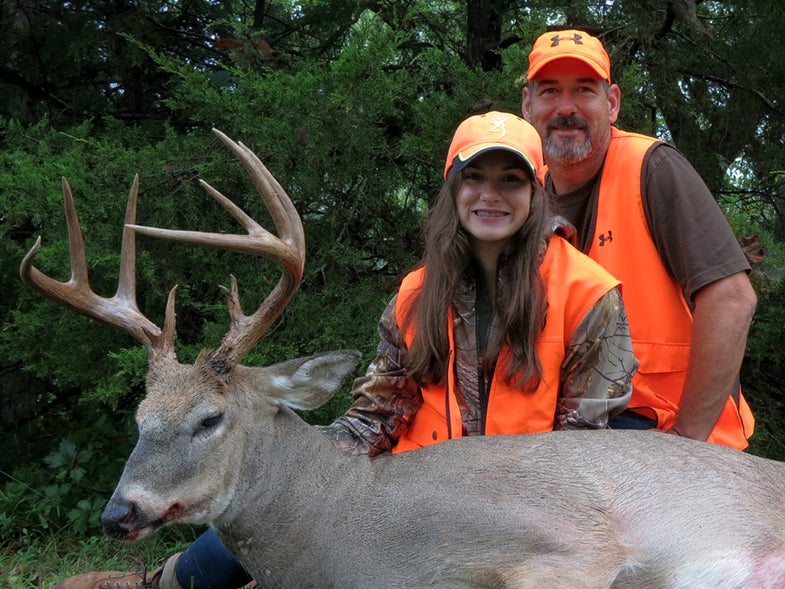 The excitement of the opening weekend has passed in many areas, and a good bunch of hunters put some great bucks on the ground. But for the rest of us, it’s time to settle in and figure out the deer that eluded our first traps. It’s a challenge, but an exciting one.

Great Plains reporter David Draper notes that hot weather has impacted deer hunting as seasons open in that region. That didn’t stop Brianna Burnham (shown above with her Dad) from killing a great 9-pointer during the early Kansas youth season. While we don’t know many details of the hunt, Draper did emphasize that the buck was still appearing regularly for the guide who’d been monitoring the buck. It’s important to note that bucks are individuals. What puts one buck on his belly (heat, precipitation, wind, etc.) may have little or no effect on another deer living in the same area. Knowing as much as possible about the individual buck you’re hunting is key.

Draper also brought up another important point when he quoted Nebraska hunter Henry Obermeier, who said “on hot days you’re better off staying at home.” I wouldn’t go quite that far. I think you should hunt any day you have the opportunity and desire. But it does make sense to save your best spots for ideal conditions. Whatever you do, don’t get aggressive—say, setting up closer to the bedding area of a good buck—on a day when he’s not apt to move at all before daylight. When conditions are far from ideal but you really want to get out, that’s the perfect time to try a new, low-impact spot. You might get lucky, and even if you don’t kill a deer, you might learn something.

South reporter Josh Honeycutt did a nice job of laying out a plan for deciphering—and setting up on—early-season rub lines. His approach is spot-on, though I do have one cautionary add-on: If you’ve nailed down an early-season rubline, only hang a trail cam if you feel you can do it without spooking the buck. Some bucks are highly cautious and easily spooked by either the camera itself or the intrusion it takes to set it up. In my opinion, the rubline by itself is a huge tip-off to a vulnerable buck and constitutes all the information I need to set up. I’d only risk a camera setup if everything seemed perfect for getting the buck’s photo without spooking him.

Western reporter Brian Strickland pointed out a challenge that most whitetail nuts don’t have to face: the destruction of habitat caused by wildfires. While Strickland notes that much of the preferred habitat of western deer seems to have escaped the widespread fires this summer, he also warns that it’s best to put some extra effort into early-season scouting efforts. My elk-guide buddies also remind me that occasional fires can have a bright side. In the short term, they concentrate deer in remaining pockets of habitat. Later, regenerating burns often provide excellent new habitat as the regrowth provides food and cover for deer.

As reports from our experts across the country indicate, this is a period full of challenge and excitement. With food sources—and in some cases, cover—rapidly changing, it takes some effort to stay on top of deer movement. Stay tuned to Rut Reporters for the latest intel on how to do just that in your region.