Right now, in the majority of whitetail habitat across the country, breeding activity is at or very near its apex.... 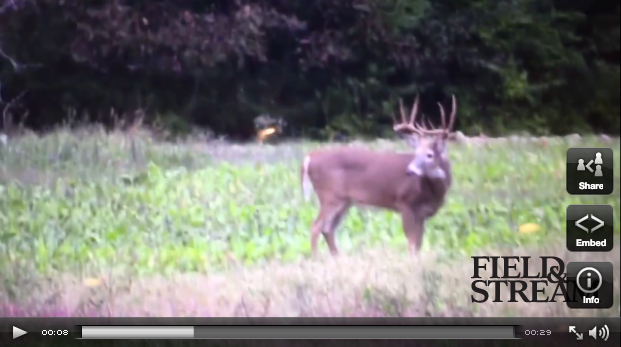 Right now, in the majority of whitetail habitat across the country, breeding activity is at or very near its apex. Which is the nice way of saying: It’s lockdown. But you still need to be out there. If you need some encouragement, consider that most of the F&S rut reporters filed their most recent post from or just back from the field.

Mid-South reporter Will Brantley tagged a nice 9-pointer just this weekend and perfectly summed up lockdown hunting: “This time of year, a single hot doe can turn your entire day, weekend, or season around…. You just have to park it in places where you’re most likely to see them.”

South reporter Josh Honeycutt offered a pair of options in his latest post: Either hunt thick cover where a buck may have a doe pinned down, or hunt travel corridors to catch a cruising bruiser between mates. I’d add one more option, as I did in my latest post: Hunt the hottest doe feeding areas.

In any case, it’d be a good idea to do like Northeast reporter Mike Shea, who wrote, “I, for one, will be in a treestand every chance I get.” Or as West reporter Brian Strickland suggests: “The bucks are on the move, and you need to be in the woods.”

The key thing to remember is that “lockdown” isn’t nearly as ominous as it sounds. It’s not as if every big buck out there is too busy tending does to cruise past your stand. Some are between does and looking for the next one. The perfect example is the first buck in the video above above, provided by Indian Hill Outfiters in northeastern Missouri, where I’ve been hunting all week. (Ignore the background noise and just focus on the bucks.) I saw this stud out trolling for a doe at 11:30 am yesterday. Also, it’s not as if all bucks everywhere are locked down at the same time. The truth is, bucks can be mostly locked down on one farm, and up and running like crazy just 10 miles down the road. So get out there, and sit as long as you can. The giant that will make your season may be on his feet right this second.