We outdoor writers have written about the different phases of the rut so often that we’ve hoodwinked folks (including ourselves)... 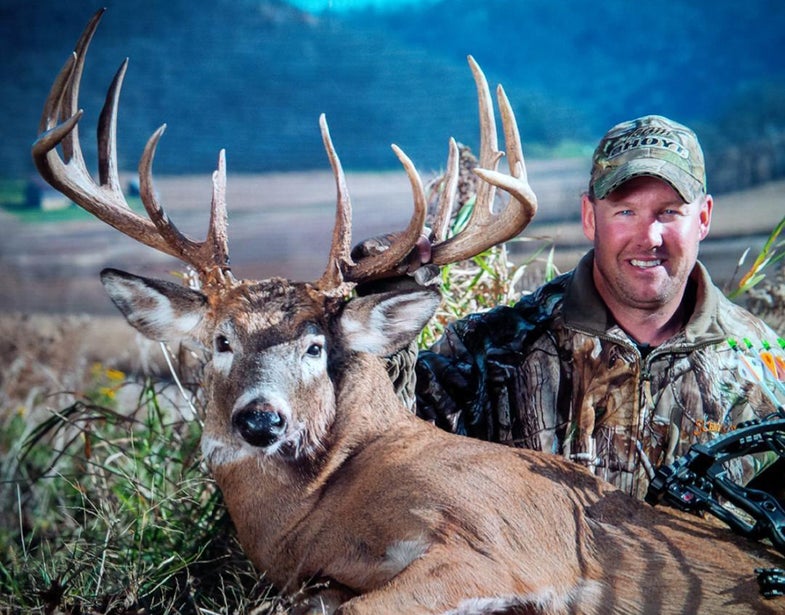 We outdoor writers have written about the different phases of the rut so often that we’ve hoodwinked folks (including ourselves) into thinking that those phases pop along in a neat sequence, each marked by distinct characteristics and hunted in different ways with different levels of excitement. (To be fair, there is a kernel of truth in that.) But by in large, the rut is pretty chaotic and in a constant churn. You just grind it out in places of good deer activity and habitat, and hope that the card shuffle goes your way that day.

Of course, the cool thing about the rut is that it’s full of surprises. Such was the case with Thunder Ridge Outfitters client Wes Michels, who shot the giant buck pictured above on a recent hunt. “We didn’t know the deer,” says outfitter Tony Sehman. “We figure he came off the neighbor’s property, searching for does. The buck basically walked under our client’s stand, and Wes made a perfect shot. Minutes later he was texting us that he shot a buck that he thought would make B&C. Uh…yeah. He should make it!”

Overall Activity: As if the constant shifting of breeding activity isn’t enough, the weather threw some serious curveballs at hunters in the region this week. Warm weather, followed by serious rains, hampered hunting in Iowa, Missouri, and Illinois. High winds came on the tail of that rain system, and now up to 6 inches of snow is a possibility this weekend. When the weather gets crazy like this, overall deer movement is usually subdued. However, if you can hit the lull before a storm or hunt in its immediate aftermath, it can be very, very good.

Fighting: Some mega-brawls have clearly broken out as the rut has progressed. My neighbor called to report that a hunter on a nearby farm had killed a buck we knew well. I’d prematurely nicknamed the buck “Mr. Mellow”, because he’d routinely let us glass and photograph him this summer. But then he broke off the end of one main beam in velvet, and I got a series of pics of him in October that showed him with broken tines. The hunter who killed Mr Mellow used a decoy, and the buck came in aggressively to the fake. He’d clearly been brawling all fall; the main-frame 10-point was so busted up that he barely made the four-points-on-a-side minimum requirement in our area.

Rub-Making: I have not seen a fresh rub in at least ten days. But I expect some new ones will pop up as more does are bred and bucks go back to seeking.

Scrape-Making: Scrapes have also died off, but like rubs will get another jump in the days ahead.

Chasing: I just returned home from a Missouri rifle hunt with Winchester Ammo at Indian Hill Outfitters, where I saw a lot of half-hearted feints by yearling bucks at does and fawns. None resulted in a full-bore chase, just minor harassment. The big guys with does were following them closely to make sure other bucks didn’t wriggle in between.

Estrous Signs: I saw two giant bucks on my Missouri hunt, and both were tending does. Other mature bucks known to the outfitter were invisible and had been for several days, indicating they were either with an estrous doe or looking for them on other properties.

X-Factor: Firearms seasons continue to be the biggest influence on deer movement. Wisconsin’s annual hunt opens this weekend, and Indiana, Michigan, Missouri, and Minnesota have ongoing gun seasons. Even with the rut in full swing across the region, hunters that concentrate near dense cover will usually have the best results.