Rut Peak Is Past, Food Sources Are Hot Now

Overall activity status: Deer continue to move pretty well across the region, though the winter-like cold we had in November... 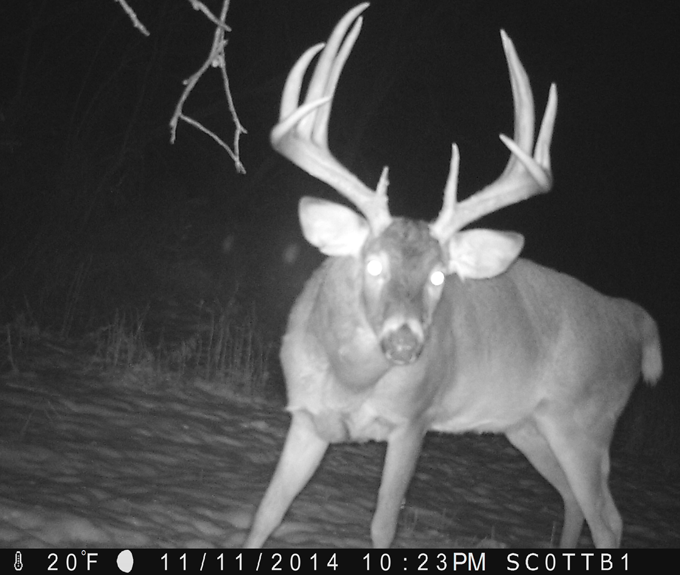 Overall activity status: Deer continue to move pretty well across the region, though the winter-like cold we had in November has eased quite a bit. Wisconsin’s just-ended firearms season was marked with warmer weather and foggy conditions on opening weekend, which reduced the expected harvest by 20 percent in most areas. Late muzzleloader seasons are open in Minnesota, Wisconsin, and Illinois; Iowa’s first shotgun season and Illinois’ second will open this weekend. Even if conditions aren’t conducive to natural movement, the influx of pressure should insure good activity for many hunters.

Rub making: I have not encountered any fresh rubs lately, but have noted several established rubs that show evidence they’ve been recently worked. This is an excellent sign that indicates a mature buck is revisiting a favored travel route through a particular area.

Scrape making: I was pleased earlier this week to discover a fresh scrape in the snow as I slipped toward one of my favorite Minnesota deer stands. The entire area was littered with tracks of every size, and heavy trails led out to a picked cornfield. This late-season food source is attracting a lot of deer, and the buck or bucks that made and/or visited the scrape are clearly looking for estrous does.

Fighting: I’m on track for experiencing the first fall where I’ve received no eyewitness reports of fighting bucks. Obviously those fights are occurring—there are beat-up and broken antlers all over the place—but bucks are managing to conduct their bouts in secret. Still, there’s a lot of time left, and one of the better fights I’ve seen occurred in mid-December.

Chasing: Definitely winding down, but still spurts of activity. My Iowa friend and fellow B&C measurer Chad Coburn watched a large central-Iowa buck chase a doe into an open pasture, then bed near her for hours. Later, just down the road, Chad watched four bucks feeding contentedly together with does–a clear sign that, for those deer at least, the rut is largely over.

Estrous signs: A mixed bag here. Obviously, finding a fresh scrape in the snow (as I did this week) and watching a buck tend his doe (as Chad did in Iowa) point to some breeding activity taking place. That said, for many deer the rut is winding down and bucks are putting on the feedbag, trying to recover from all that running.

X-Factor: Shrinking food sources. Winter-like weather has been common across much of the region for the better part of a month, and deer have been feeding actively in response. Consequently, food sources are beginning to dwindle, which means those that remain will become very, very important for deer– and not just the ones that have lived in the area for months. Right now is when whitetails from all over will congregate on one hot food source—a farm field full of waste grain, an oak ridge peppered with acorns, a fresh clearcut—and remain. The buck in the photo above is an example of what I call a “floater buck,” which is one that moves in during late fall and settles on a popular food source. Find bucks close to a bunch of does feeding regularly in one spot and you’re looking at some stellar post-rut action. And if you don’t have good deer food where you hunt, keep scouting until you find it.