Sure the rut is exciting, but I find this period—that window between velvet shed and before the first serious pre-rut... 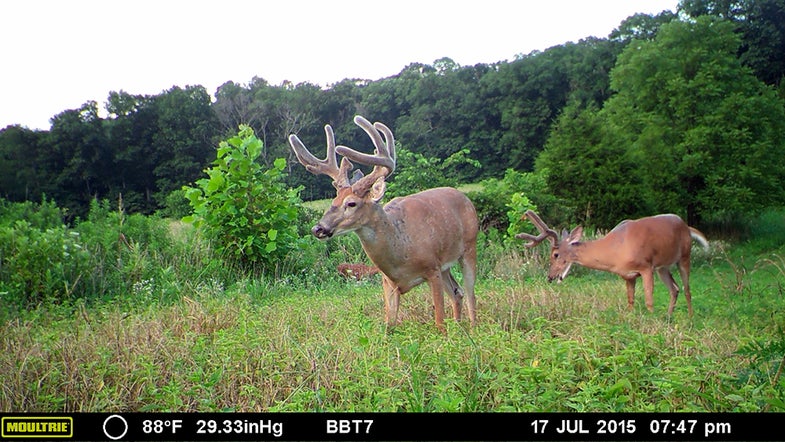 Sure the rut is exciting, but I find this period—that window between velvet shed and before the first serious pre-rut activity—one of the most fascinating times of the season. One of my reasons is purely self-serving; I’ve tagged my three biggest bucks from mid-September through early October. But there’s more to this period than just killing a nice buck; I think figuring out and monitoring bucks during this time frame has taught me a lot about whitetails and, by default, has made me a better hunter.

I was talking about this topic just this morning with Danny Clipp, head guide at BBT Outfitters in French Lick, Indiana. Danny, and BBT owner Ben Reynolds, have been trusted contacts for Rut Reporters for the last three season, mainly because they are true students of big-buck behavior. Clipp sent me the photo above and noted that bucks in his region are still shedding velvet. “As that happens, some of them go off by themselves, sometimes for the rest of the fall. Others will stick together for awhile, either in pairs like the deer in this picture, but others in small bachelor groups.”

Clipp’s observations match my own, and this shift in buck behavior is what most hunters will face in the region as archery seasons open in the weeks ahead. Adapting to that shift can be tricky. While some bucks will remain in predictable places and continue hitting nearby food sources, others will break away and, in many cases, be tough to find again.

When normally visible bucks disappear, start looking for covert food sources. Across most of the region, acorns are the best starting point. Even in years with poor mast production, there are usually a few trees dropping. It can take some walking, but finding these nut-producers is worth the effort. In other cases, bucks will continue hitting easily observable food sources, but different ones. The best example here in farm country is the annual shift away from maturing (yellow) soybeans and toward late-crop alfalfa. Beans here in Minnesota are yellowing in a big way, and whitetails stop eating them in this stage. Meanwhile most farmers have cut their last crop of hay, and so the deer switch over to the lush, green regrowth.

Another way to re-locate a buck is to start scouting the closest prime habitat adjacent to his summer home range. Again, the shift here can be very small, but because early-fall cover is dense, finding out a buck’s new haunt can be a challenge. We have a local buck that jumps from one side of a gravel road to the other; a tiny move, but one that puts him on property I can’t hunt. After two seasons of studying this deer, I think I’ve figured out that he likes a certain north-facing slope for early-fall bedding. But once the rut starts, he’ll be moving big again.

The good news about the early-fall shift is this: With some additional scouting and hard work, you can usually get back on a buck that has seemed to disappear. And he’ll be doing what all early-season bucks do—eating like a hog in a reasonably predictable manner. That’s an exciting prospect for any deer hunter!