Slip Closer For Success This Weekend

Overall Activity: Deer activity has taken a bit of a nosedive in the region lately. The weather has not been... 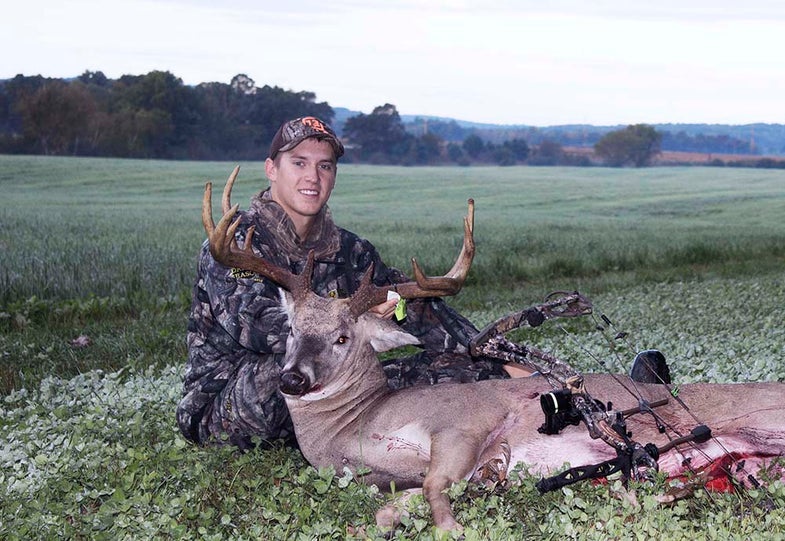 Overall Activity: Deer activity has taken a bit of a nosedive in the region lately. The weather has not been conducive to good deer movement, as warm and sometimes humid conditions have been the norm. That said, hunters who can slip in to good feeding areas tight to bedding cover—such as acorns or a small hidey-hole plot—can have good action. A contact in north Missouri watched six good bucks gobble acorns for an hour one evening. One was a borderline shooter, but my friend elected to pass.

Fighting: No serious bouts to report. However, I interviewed two successful hunters from Wisconsin this week who both reported sparring during their hunts. One of those hunters was Tyler Faldet, who scored last Sunday on the big, main-frame 8-point pictured above. Tyler said his buck was cracking antlers with a smaller (120-class) buck. “I was sitting on a small food plot we’d put on a logging road going through the woods,” Tyler said. “There were acorns dropping all around me, and I think they played a huge factor in those bucks being in that area and using the plot. After they finished sparring, the smaller buck came into the food plot, and right behind him was the big one.”

The buck was one Tyler knew well. “I’d seen him several times last fall, and played cat and mouse with him through the season. I’m glad I didn’t kill him then though, because he just blew up this year. I had pics of him all summer, and then he left for about a month to feed on the neighbor’s alfalfa. But when fall came he moved back onto us. We don’t pressure that farm, and I know he felt safe there.” Tyler’s buck grossed 150 inches and field dressed at 204 pounds.

Rub-Making: After the initial flurry of post-velvet-shed rubs, my scouting trips haven’t revealed many new ones. I expect that to change in a big way in the coming week.

Scraping: I’m seeing a lot of fresh scrapes, especially on the edges of feeding areas and staging areas back in the timber. These staging area scrapes are an excellent place to set up for an evening hunt.

Chasing: None to report.

Estrous Signs: Nothing happening yet. In the first week of October I expect to see some mature does coming into estrous. Like secondary breeding, this won’t be a big event, unless you happen to be lucky enough to find a doe and the bucks accompanying her. Keep an eye open for flurries of buck sign in a small area; that will be a huge tip-off to this early breeding.

We’ve been in a fairly long pattern of warm, sticky weather. Keep an eye on the forecast for approaching storms and cold fronts. If you see one coming, make plans to hunt in the hours preceding or following the front. That sudden shift in weather can be just the ticket for prodding a lazy buck to his feet.