Weekend Motivation: The Story of a Wisconsin Booner

Since my last post about bow seasons starting here in the upper Midwest, I’ve been anxiously awaiting reports of the... 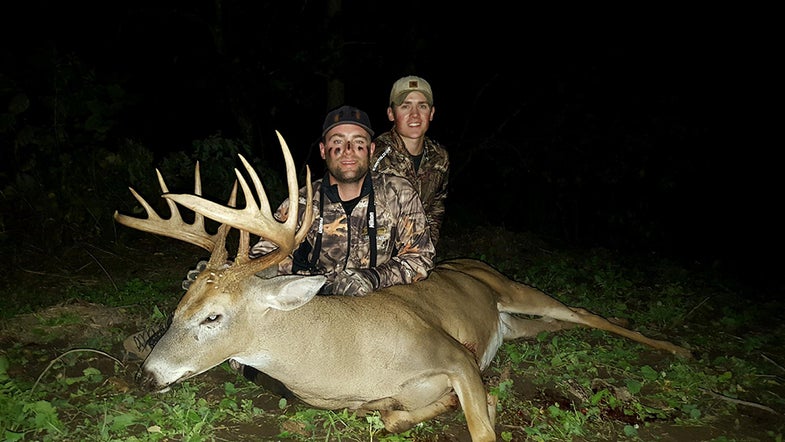 Since my last post about bow seasons starting here in the upper Midwest, I’ve been anxiously awaiting reports of the first nice bucks taken in the region. Well, I didn’t have to wait long. Just the other night, I ran spoke to my friend Ryan Meyers, an avid bowhunter who shares stories and trail-cam pics whenever we meet. I knew Meyers was hoping for a shot at “Larry,” a Wisconsin monster buck he knew well. So I skipped the formalities and cut to the chase. “You kill Larry yet?” I asked. The Badger State bow season was only three days old, so I was more than half-joking.

“As a matter of fact, I did, just last night!” Meyers told me.

After showing me pics of the 171-inch (green gross) 12-point—a 4-1/2-year-old buck that he’d passed an easy shot on last year—Meyers told me the tale:

I hunt a farm with my friend Jordan, whose dad owns the property. Jordan and I have done a lot of work there, planting food plots and putting in water holes. Larry showed up last year as a 140-class deer, and one that gave me a chance three days into the season. I’d looked at enough trail-cam pics of him to feel that he had a lot of potential, so—hard as it was—I decided to pass the shot. Jordan wanted him pretty badly, and he had four encounters with Larry that fall, but he just couldn’t get him killed.

This summer Larry was right back feeding in the same plot as before, and he was a regular. We’d get a pic of him at 3 p.m., then another at 6, and sometimes even one more in the course of an evening. His rack looked fantastic; I was thinking he’d put on at least 20 inches. But for the first two days of the season, Larry was a no-show. Jordan and I were both hunting that area. He saw a couple bucks, but nothing big. I only saw a spike.

On the third evening, hunting alone, I sat the food plot where we got all the pics of Larry. But I wasn’t seeing anything. It was really windy and just one of those days when you feel like it’s not going to happen. There was still shooting light when I decided it was time to hang it up. I put my stuff in my pack. Then I put my bow into my bow-sling and was about to start lowering things down when I took one last look at the plot. Larry was standing there, 15 yards away!

I went into full-blown panic mode but somehow managed to get my bow out of the sling, hang my pack, and nock an arrow. Meanwhile, Larry moved right under the stand, sniffed a sight cover I’d dropped, and look right up in the tree at me! How he did all that without blowing out of there is just amazing. I actually nocked my arrow three times–once below my loop, once above the loop, and finally in the right spot. When I finally got everything together, I fully expected him to be gone. But I looked up and he was still there, quartered-away in the food plot, and back at 15 yards.

He went only 40 yards before tipping over. It was a pretty amazing hunt. And I got to share it with Jordan and some other friends, all of whom dropped what they were doing and came out to help with the buck and celebrate with me. My wife is having our first baby this fall. So it’s shaping up to be a great one!

Now, after that story, if you’re not chomping at the bit to get into a treestand this weekend (or as soon as possible), then there’s nothing else I can do for you.