The real magic of this time of year is that with a little luck you can find a buck—even a... 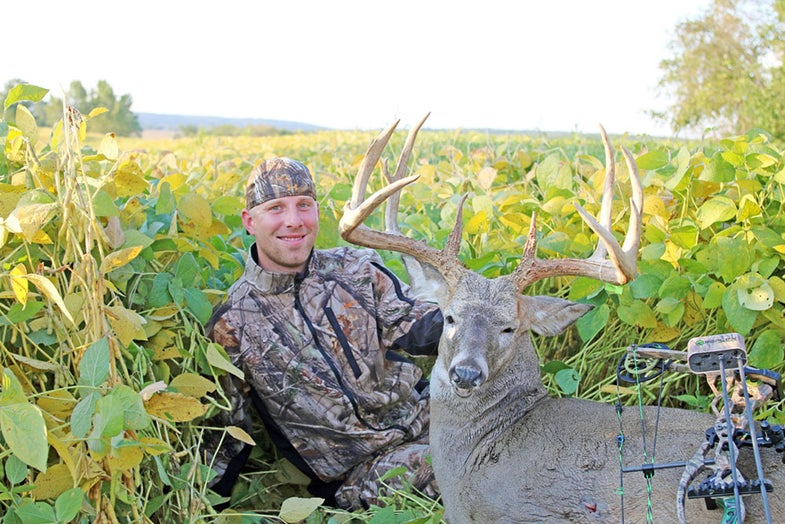 The real magic of this time of year is that with a little luck you can find a buck—even a really good buck—that is not only on a predictable pattern, but is being quite visible about it. But that’s no guarantee of filling a tag. Not by a long shot. You need to figure out how to set up within bow range without tipping him off. Wisconsin bowhunter Tyler Florczak did just that last week—and tagged the 179-inch giant pictured above. Here’s how he got it done:

I first saw this buck last year while driving to work, and I named Breath Taker. He was in the high 150s then, and I knew that a couple of other people had also seen him and were even trying to hunt him and a big 8-pointer he roamed with.

This season is only my fifth year of bowhunting, and even though I drew my first black bear tag this year, all I wanted to do was hunt that buck from the moment I saw him this summer. And he wasn’t shy about showing himself. The buck was a regular in a bean field all summer, and he was usually in a bachelor group of other bucks that he made look pretty small.

In late July I got permission to hunt a small parcel next to where I’d been seeing him feed each night. So a buddy of I hung a stand. We didn’t scout the woods much or penetrate the property very far after seeing beds quite close to where we had entered from the road. I figured that I’d seen him enough with my own two eyes, so I really didn’t need any trail cameras in there—that would’ve just tempted me to check them and add more scent near his core area.

On the evening of the bow opener (Saturday, Sept. 12), I snuck into the stand and had probably my best night ever as far as action. By 7 p.m. I was looking at about 25 deer, including six bucks, which were sparring with one another. Then I heard more tines clicking behind me. I turned and there was Breath Taker, sparring with a tiny fork buck! But he never got closer than 60 yards. I ended up having to sit in my stand until 9 p.m. because there were so many deer around me.

The next evening, I had a super slow sit. At around 6:45, an ambulance screamed by out on the road, and a coyote started howling back. He was only about 30 yards from me, and I assumed this was why I hadn’t been seeing anything. I texted a buddy and said I’d be getting down from the stand in a few minutes. Then I turned around to the exact same spot Breath Taker appeared the night before and there he was, thrashing some tall grass with antlers.

I drew back and put my 40-yard pin a little high, estimating he was at 45 yards. I watched my arrow sail right over his back and my heart dropped. He didn’t spook much, though, and I think he assumed that something was behind him. He then moved closer and circled me slightly as I knocked another arrow. My second shot was at 20 yards, and I made it count.

He went about 40 yards and crashed. I was just speechless. I was shaking like a leaf in the stand—so bad I couldn’t even use my phone—and couldn’t believe what had just happened. It almost felt like I was in a dream it was so surreal. I finally texted my buddies and told them I’d shot the big buck. They didn’t believe me! When we all saw him on the ground a few hours later, it was just the most special moment I’ve ever been a part of. Everyone was giving out high fives, chest bumps and man hugs. I’m so lucky and fortunate that I got a second shot, and I truly believe my uncle who passed away last year was with me on that one. It was the best day I’ve ever had besides marrying my wife. I was so thankful how everything fell into place and all of my best friends were around to help me find him.