An Early-Season Big-Woods Buck Plan for the Northeast 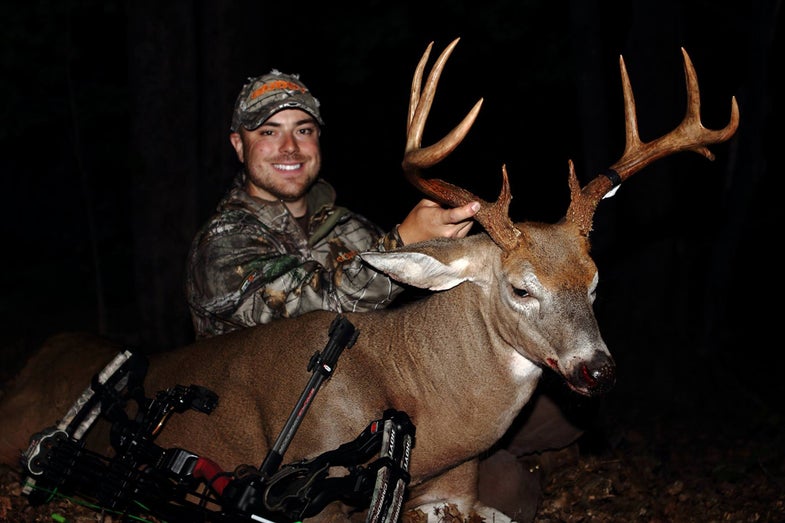 Northern New York, Maine, New Hampshire, and Vermont are known for their big-bodied bucks, but good luck finding a bean field to shoot them over. State land in southern New England, Ohio, Pennsylvania, and western New York can have the same problem—it’s all old-growth forest or reclamation timber projects that lack concentrated foodstuffs.

So what’s the best game plan for a deep-woods early-season bowhunter? Scout cover and don’t sweat the food source. That’s the advice of Brett Joy, a New Hampshire deer hunter and Northeast contributor to Midwest Whitetails, who’s fast making a name for himself as a timber-country deer slayer.

“Up here we don’t have ag, but right now we’re seeing an exceptional mast crop, both hard and soft, especially red oaks and apples,” Brett said. “So there’s food everywhere. It’s all spread out.”

The trick is to find the deer’s preferred food source. That could be the handful of trees in a mountainside of oaks or one particular stand of apples in a landscape littered with them. “With a big mature buck, the kind of deer we’re after, the preferred food source is almost always the one closest to bed,” Brett said.

In the big woods, Brett looks for cattail swamps and early successional growth and then throws up a trail camera. When he finds a shooter buck, he pulls the camera and backs out. “I don’t run the risk of bumping him while checking cameras,” he said. When opening day comes, Brett sits near the closest food source.

“It’s not anything different than how you’d hunt a mature buck in the Midwest, except it’s much more subtle,” he said. “The choices the deer make aren’t always so obvious.”

Brett’s strategy is paying dividends: Last night he had an encounter with an 8.5-year-old, 145-inch six-point that he’s watched for four years. He’ll be after him again this week. His buddy Johnny Browns used the same playbook to score a 160-inch monster on New Hampshire’s opening day —a story I’ll bring you real soon.

“Just focus on bedding,” Brett said. “When food is everywhere, just focus on the bedding.”