Buck Activity on the Rise in the Northeast

Photo: Isabella Smith with her New York youth-weekend 6-pointer. An uptick in buck activity this week across the northeast has... 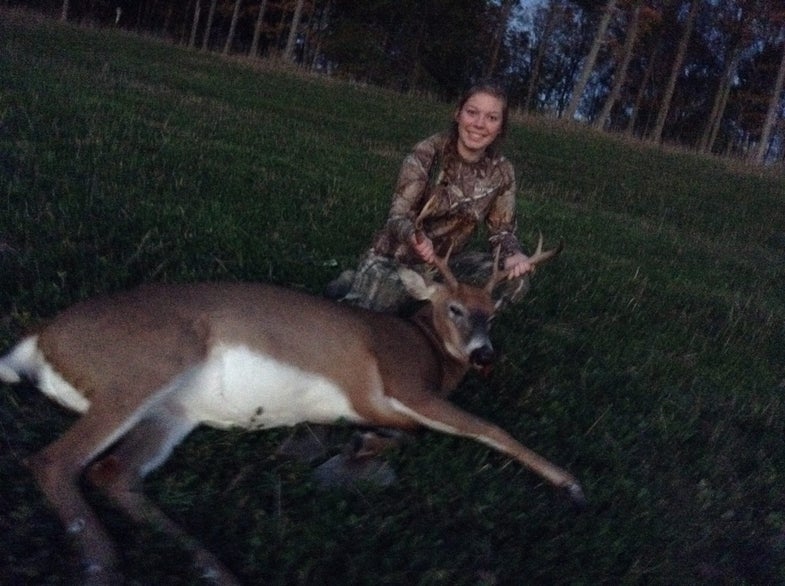 An uptick in buck activity this week across the northeast has some hunters doubting the October lull. Many have speculated that the dark moon on Tuesday, coupled with a cold front moving in from Canada, has bucks on their feet during daylight hours.

Doug Thornton, a past Hero of Conservation, who runs the high school Spencer-Van Etten Sportsman Club, has been in the woods nearly every day since New York’s October 1 bow opener, either hunting, moving stands or checking cameras. He’s just now starting to see solid rub lines and a few scrapes pop up. Bucks stopped posing for his hunt club’s 30 trail cameras, covering more than 500 acres of deer ground, about three weeks ago, but last weekend they started to show up again.

“I don’t know if they’ve been in the standing corn, or soybeans, but they’re back and starting to move,” he said. “I sat every day this week, and on every sit I’ve seen little bucks moving. Nothing is hot to trot, but it’s starting to ramp up.”

Last weekend’s youth deer hunt in New York was a success for the kids in the Spencer-Van Etten Sportsman Club. High school student Isabella Smith shot a great first deer, a good 6-point with an easy live weight of 200 pounds plus. Nick Yartyn and Adam Simonton both shot 6 pointers as well.

With temperatures dipping below freezing in much of the northeast this weekend and Monday, it could an ideal time to shoot an October slammer. Acorns, apples, beech, grapes and berry crops have been excellent in some areas, and spotty in others. Where there aren’t acorns, many are reporting deer in green fields and soybeans. In New Jersey, Delaware and Maryland, 90 percent of the corn is cut and many farmers who double plant soy still have green fields—and probably will through the end of this month unless they’re frozen out this weekend.

“There’s been more deer activity in the last five, six or seven days then there has been all season,” said John Kostick, an outfitter with B&J Guide Service on Maryland’s eastern shore. “We killed a decent buck last week, 11-points, dressed about 218. We caught him in the woods, probably heading out to the beans.”

Kostick is setting up hunters on stands in staging areas, in the woods, about 30 or 40 yards back from a destination food source.

At the top end of the U.S. whitetail region, in Jackman, Maine, deer numbers look solid, said Mike Stevens, a guide with Cedar Ridge Outfitters. Winterkills in 2007 and 2008 hammered Maine’s deer numbers, but it now looks like they’ve rebounded, he said. “Everyone is seeing lots of deer again,” Mike said. “It took awhile, but we’re glad they’re back.”

In the big woods, beech and mountain ash are having a good year, but deer are still mostly on a summer pattern. “Up here, when I say summer pattern, I mean bucks are still out in daylight working the edge of logging roads and wood yards. Some guys will plant clover in those spots, and they’re still getting daylight trail cam pictures,” Mike said. “We haven’t had much frost yet, but in a couple days it’s coming. That should keep the deer up and moving.”