Bucks Still Running in the Northeast

The peak of the rut is behind us here in the Northeast, but the slowdown of breeding activity is a... 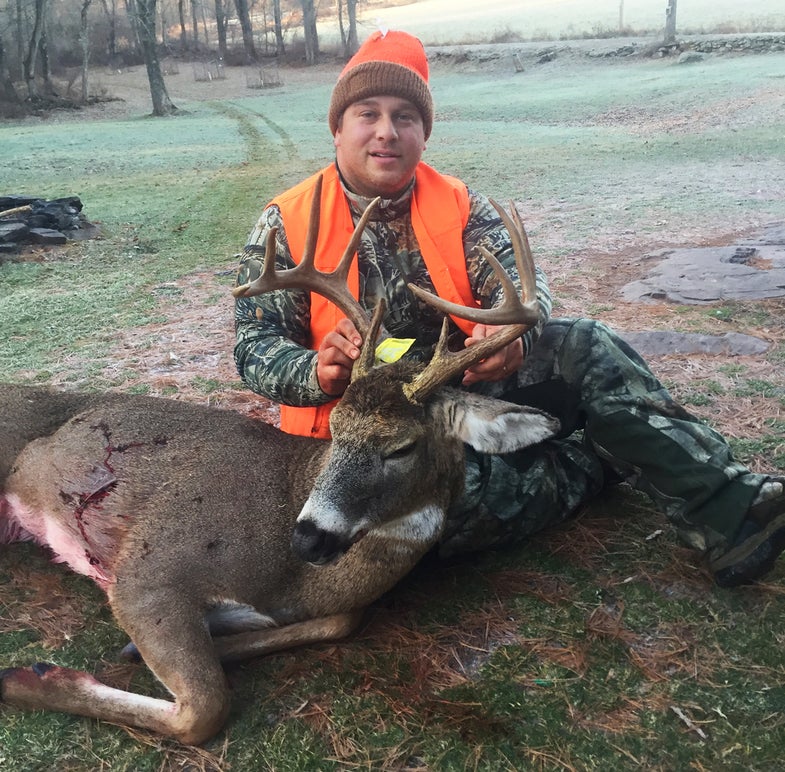 The peak of the rut is behind us here in the Northeast, but the slowdown of breeding activity is a lot more gradual than the sharp uptick in buck shenanigans that typically kicks off around Halloween. The tail end of the rut lingers, and mixed with gun season pressure—all gun seasons are now open in the Northeast—bucks can be on their feet during the day, running for love and life.

Despite the firestorm of hunting pressure that is opening day of gun season in Pennsylvania, James Matos connected on a great 10-point at first light on Monday. But the buck wasn’t running scared. He was following does:

Well, I have no history with this buck. I don’t have any trail camera photos of him. Two times, while pulling into my driveway at night, my headlights have gone across my neighbors field and I may have seen him out there. Both times it was just like, “Wow, that is a big buck.” So, opening day of gun season was Monday and I walked in at dark, 6 a.m., and right away I bust a bunch of does. There goes the hunt, I think. Ten minutes later the neighbor walks in with his green headlamp not 60 yards from me. Now I’m like, this is never going to happen. Then at 6:30 I hear this crunching of leaves, and I know it’s a deer. I hear a grunt. But it’s too dark to see anything. At 6:40, finally, I see the outline of a deer and I take my binos up and see antlers. I checked Pennsylvania legal shooting time the night before, and it was 6:42. Those were the longest two minutes of my life! Right then, the buck starts walking away and circles into the wind at about 80 or 90 yards like he’s heading toward those does I busted. He steps behind a tree and stops. I don’t have a shot. He steps out and I look at my phone and it’s 6:45. I pull up my rifle and I’m breathing so hard I fog up the scope. Finally, I get it cleared off, and calm down a little, and he’s behind a tree again. I have no shot. Finally, he steps broadside and just instinct kicks over. I don’t know what happened, but I shot and the deer is on the ground. It’s the biggest buck I’ve ever killed, by far.

James had more history with the big 10 then he initially realized. Last summer, he and his wife were kayaking the Delaware River, about a mile from their house, when they spotted a big buck along the shore. He snapped a cellphone photo. Three months later, the same deer is on the ground.

Overall Activity Status: When it comes to mature bucks, things have gone dark for many hunters. Young bucks running wild are still being reported everywhere. Just last night, driving home from town, I almost filled my buck tag on a small 2.5-year-old that jumped out in front of my truck. He was in a flat-out, mouth-open run. Many hunters in my network, oddly enough for this time of year, are reporting the same thing, but accounts of big bucks behaving as such have been few and far between. On Monday, a hunter in Len Kahle’s camp, shot a small fork horn that came in nose to ground following a scent drag, but the overall feeling in western Mass. on opening day was disappointment, he said. “I’m hearing some guys complain they aren’t seeing deer as much, they definitely aren’t hitting the fields as much because of all the food in the woods.” Similarly, I went to friend’s camp over the weekend—a full week into New York’s gun season. Of the 10 or 11 guys, only one had filled a buck tag. Nearly everyone has had opportunities on smaller deer, but not shooters. In previous years, four or five guys would have had a good buck by now.

Fighting: On Saturday at my lease in the Finger Lakes, a friend saw three shooter bucks crossing a hay field neighboring our property. Odd of them running together, he thought, and then the two smaller deer stopped in the middle of the field and squared-off. They locked up, brawled for a minute, and then followed the lead buck, the biggest buck, into a stand of cattails—a known doe bedding area.

Rubs & Scrapes: Fresh rubs are popping all over central New York, Massachusetts, and Pennsylvania. Over the holiday, I walked miles of state forest hunting grouse, and it seemed like every couple hundred yards I bumped into a fresh rub or scrape. Dan Damours, who I wrote about last week, killed another great buck on Massachusetts opening day of gun season on Monday and wrote me: “I saw more fresh rubs and scrapes than I think I have seen all season. Rubs on cedars as big as your calves with the rubbings fresh at the base of the tree and scrapes with fresh dirt covering the leaves for feet behind the scrapes!”

Chasing: In Pennsylvania, James Matos’s friends saw several small bucks chasing does over the opener. Friends in New York reported the same thing over the weekend. It seems like the yearling bucks got torqued up around Halloween and haven’t quit, but big deer sightings definitely have declined within my network of sources.

Estrous Signs: Most guys running cameras tell me the does have reunited with button bucks and fawns. I haven’t pulled cards on my property, but likely will once the temperature drops again and I pulled another series of sits.

X-Factor: Weather and food. Many still hunters are praying for snow. Mike Stevens of northern Maine sent this report: “Extremely warm weather, few days below freezing, has kept deer movement down up here. The rut seemed to peak around Nov 18-20 with several big 200-plus pounders tagged. Even with the kill down because of warmer weather, several good bucks have been harvested—257 pounds, 232, 223, 221, to mention a few. We’re hoping for tracking snow for muzzleloader week. That’s right, no snow for the whole month of rifle season … unheard of up here…”

Right now, time spent finding late season foodstuffs frequented by does is time well spent. Does not bred the first time around, and some fawns, will be coming into estrus again shortly and buck activity in the “second rut” or “December rut” could be good in the Northeast.