Bucks Still Searching for Estrous Does 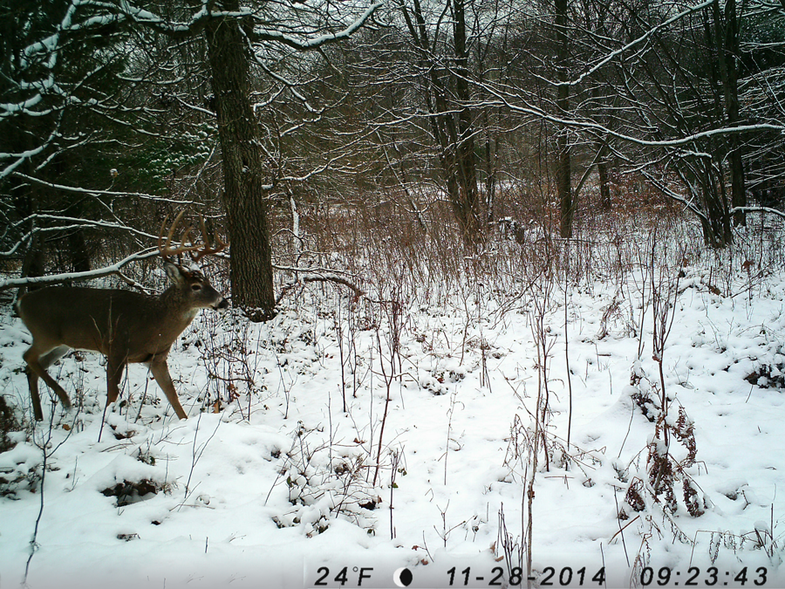 Over four days, two trail cameras set in great spots in north-central Pennsylvania’s McKean County produced one deer photo: a doe that passed one of the cams at night. Driving 96 miles over back roads in the northeastern part of the Allegheny National Forest and seeing not a single deer track was a bit of a letdown.

Meanwhile, in the northwest corner of the Allegheny National Forest, in Warren County, the whitetail world appeared to be completely different. A trail camera set from November 13 to November 29 showed buck photos every day except November 14, 15, 21, and 25. On both November 13 and November 29, three different bucks made an appearance. A few of those bucks walked by the trail cam during daylight, like the nice 10-point with long tines shown above. That is one dandy big-woods buck. I don’t think it is very old, 3 1/2 years at the most. Look how its waist still pinches in a little, with no paunch.

There’s more: On the path leading to that busy trail cam I saw a fresh scrape and a couple of fresh rubs.

Jumping to conclusions in this matter is tempting, but let’s take a closer look.

That McKean County cam is set on a funnel along a path that runs the top of a high ridge. An animal moving along the ridge must go by the trail cam. Apparently there have been no bucks on top of the ridge for at least the past several days.

Just because the rut peak has passed does not mean the rut has ended. Bucks are still looking for does in estrus.

Today my hunting partner, Bill Anderson, and I will be looking for that Warren County 10-point. If I do not fill my buck tag, then probably I will go after the McKean County 12-point. But in either case, I will not hold out for the biggest buck. I am hungry for venison schnitzel.

Jon Whitbred in central Pennsylvania reports that the only trail cam pictures of bucks he is getting lately have been taken at night.

Rob Rogan, in Connecticut, got out hunting yesterday morning. He saw one doe with five young bucks in tow before 9:00 a.m.

SigShooter78 and a friend saw four bucks in the late afternoon while hunting in southeast Pennsylvania last Tuesday.

HuntingWesternMass commented three days ago that hunters in his area have been disappointed by light deer activity.

From NorthEastSportsman in west-central Vermont we hear that deer activity was good as of last Wednesday.

It’s not surprising that the deer situation varies around the Northeast Region. For those of you who are still out there, be confident that you might see just the deer you want at any minute while hunting. Within the next couple of weeks, the secondary rut peak should be evident by increased daytime buck activity. Count 28 days from the primary rut peak in your area, give or take a day or two.