Fewer Deer But Bigger Bucks in the Northeast?

Photo by Michael R. Shea: A young New Jersey doe looks up from a late morning breakfast on Sunday. Last... 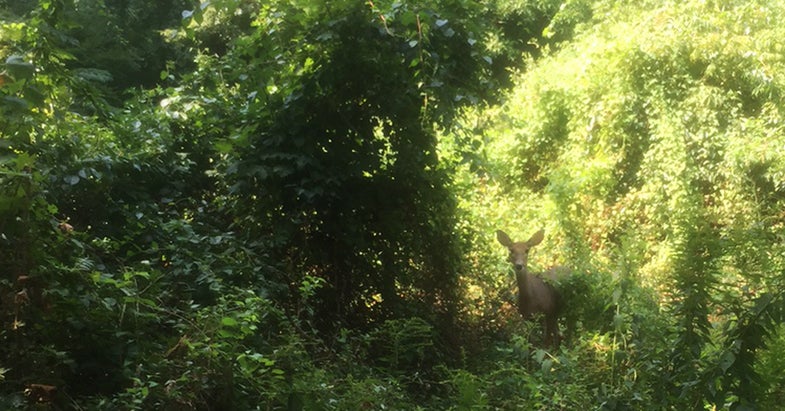 Photo by Michael R. Shea: A young New Jersey doe looks up from a late morning breakfast on Sunday.

Last season was hard on deer hunters in the Northeast. The near-record mast crop dispersed whitetail across much of the region, scattering them from more concentrated groceries. Several food-plot and farmland hunters I know didn’t get their shot at a good buck until almost December. Compound the mast crop with a hard winter, as well as regulation changes, and the picture wasn’t pretty: Harvest statistics were down across the Northeast—from a 9-percent drop in Maine to a hard 14-percent falloff in Pennsylvania.

Some states fared better, though, such as New York, with a 2 percent overall decline and a 5.3 percent dip in tagged bucks, and Maryland, with a 3.4 percent drop. Gun hunters seemed to have absorbed the worst of it, though: In Ohio, 13.2 percent fewer gun hunters bagged deer in 2014 compared with 2013, though only 4.6 percent fewer archery tags were filled.

Will 2015, with its harsh winter, dry summer conditions, and additional regulations, be a repeat of 2014?

“This last season made five consecutive declines in total harvest numbers, and I anticipate one more year before they level off,” said Mike Tonkovich, deer program administrator for the Ohio Division of Wildlife, “but hunters can anticipate a few more bucks than last year.”

And those, Tonkovich said, could be bigger bucks.

Last year, Tonkovich published a study contrasting herd size with the past 50 years of entries in Ohio’s Buckeye Big Bucks Club, which requires a 140-inch typical or a 160-inch non-typical to make the book. He found that the relationship between herd size and big deer is almost perfectly inverse—as populations shrink, herd quality goes up and more trophy bucks are entered in the Buckeye club. Oddly enough, though, age class doesn’t have much effect. Today’s modern herd is undeniably older than it’s disco-era ancestors. More to the point, Tonkovich said, is the availability of food and bedding habitat. In the farmland of western Ohio, food is everywhere but bedding cover is sparse, whereas in eastern Ohio it’s the opposite.

“Bottom line, the odds of you putting a deer in the Big Buck Club aren’t nearly what they used to be,” Tonkovich said. “In the 1970s, you saw about 5 percent of the total harvest make the book, now it’s about 1 percent.”

In Pennsylvania, last season, for example, almost 60,000 fewer doe tags were issued than to the year before—which likely contributed to the 14-percent overall harvest decline. The bucks taken in the state, however, were among the oldest seen in decades. The Game Commission said, “Of the antlered deer taken, 43 percent were 1.5-year-old bucks, with the remaining 57 percent being 2.5 years old or older.”

Of course, it’s impossible to predict what a hunter will see in the woods come November 11, but on a macro level, Northeastern hunters can expect to kill fewer deer but to have a better shot at taking a prize buck.