First Sparring of the Year, and Other Good Signs

Overall Activity Status: On Tuesday, September 9, Mike Stimmell and I took a drive around the same circuit of the... 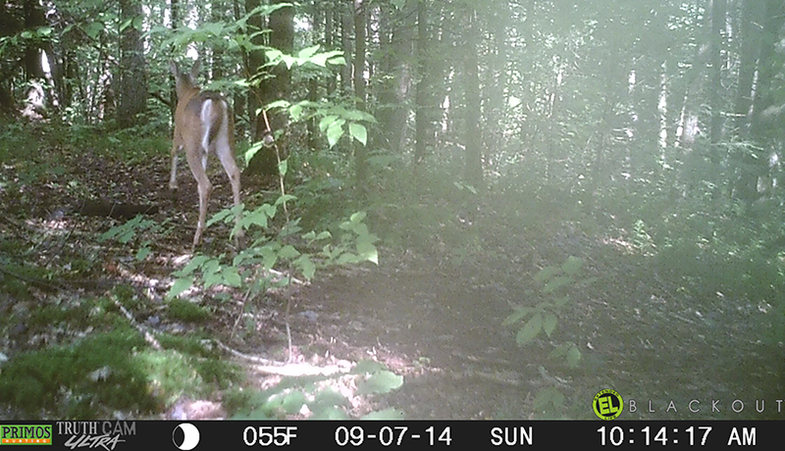 Overall Activity Status: On Tuesday, September 9, Mike Stimmell and I took a drive around the same circuit of the northwestern corner of the Allegheny National Forest that we have been driving the past few years. Since the 48 deer we saw were about as many as we have ever seen on the route, it would appear that deer are active. However, several of the deer spotted early in the evening, just after nightfall, were bedded. Later on, all of the deer were on their feet. The moon was one day past full, and it was visible in the night sky.

Fighting: While it is a little early for knock-down, drag-out buck fighting, sparring is underway. Bill Vaznis, Editor of Deer Hunters Online, reports seeing bucks sparring near his home in the Finger Lakes region of central New York. He has been seeing bucks without velvet since September 4, but some still have it.

Rub Making: On our drive through the national forest, four of the 48 deer we saw were bucks–three forkhorns and a smaller 6-point. The first two forkhorns we saw had shed their velvet. They were traveling together. The other forkhorn and the 6-point, also traveling together, were still in velvet. This appears to be typical of the region, so someone should report seeing rubs very soon.

Scrape Making: No scrape making, but the doe pictured is visiting a major scrape I have been watching in Crawford County, Pennsylvania, for a few years. Some of the biggest bucks ever captured on my trail cams were at this scrape. Last year, though, I estimated this scrape was not visited more than three times, and it was never dug-up to the extend it had been in previous falls. Might this doe’s interest (here she is digging and perhaps urinating) be an indication the scrape will see more activity this year?

Chasing: No chasing reported yet.

Daytime Movement: In Ohio farm country, deer have been feeding during the day in soybean fields. Daytime movement varies a lot around the region.

Estrous Signs: No estrous signs yet.

X Factor: Shedding velvet is the main thing happening now, though it will not be long before nearly all bucks in the Northeast Region have shed. Steve Russ, at Delaware Outdoors in Smyrna, Delaware,

said bucks are now in the process of shedding in his area. Marty Harrington polled everyone in his Marty’s Sports, Inc., Bennington, Vermont,

and found that some bucks out of velvet had been seen over the past couple of days. Aaron Stump, speaking from Crawdaddy’s Outdoor Store, New Carlisle, Ohio,

said some bucks have shed velvet, but the bigger bucks have not. He has been seeing several nice bucks, which are still in bachelor groups.